CEOs in America Continue Losing Their Jobs at a Record Pace

The number of U.S. chief executive officers who lost or left their jobs in March continued at a record-setting pace established in the fourth quarter of last year. A total of 135 CEOs departed last month, lifting the first-quarter total to 416, the highest first-quarter total since outplacement firm Challenger, Gray & Christmas began reporting the data in 2002.

The March total was about 9% higher than the February total and nearly 41% higher year over year for the month.

Vice President Andrew Challenger said, “We are seeing considerable churn in the chief executive role. Companies are grappling with changing consumer behavior and new technologies disrupting almost all industries. A difficult business environment, with economic uncertainty, is causing boards to make changes in their leadership ranks.”

Of the CEOs who departed in March, 45 stepped down, 51 retired and 11 took new positions with other companies. None stepped down to another position at the same company. Challenger noted that one CEO reportedly left due to a scandal, another departed due to sexual misconduct allegations and three were terminated. March departures included Tim Sloan, the embattled CEO of Well Fargo, which among the companies with the worst reputations in the country. He abruptly retired on March 28.

The government/nonprofit sector saw 36 CEO changes in March, bringing the first-quarter total to 95, the most of any Challenger category and a 48% year-over-year quarterly increase. Financial sector CEO departures in the quarter increased by nearly 9% year over year to 37, the second-highest number of departures among all industry categories. Tech industry CEO departures totaled 34 and were 15% lower than in the first quarter of last year.

The following chart from Challenger’s March report shows CEO departures by month from January 2010 to March 2019. 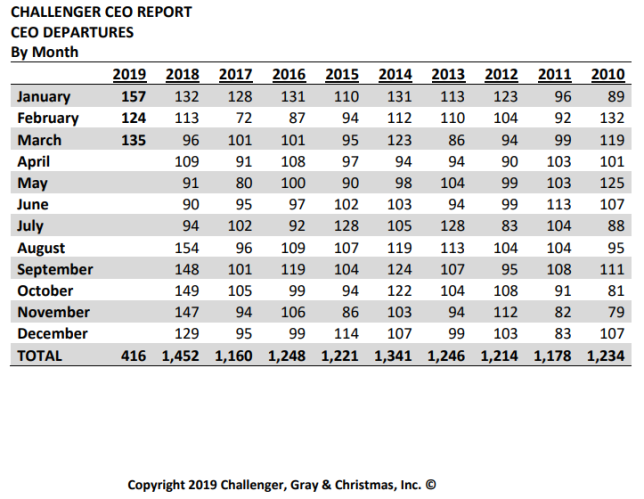