Famous Colleges Aside, It's Easier Than Ever to Get into Good Universities, Study Shows

Among the things lost in the admissions scandal involving parents who paid money under the table to get their children into elite schools is that college is not that hard to get into. According to a new study, most colleges admit more than half of the applicants.

Pew Research examined application policies at 1,364 four-year colleges for the period from 2002 to 2017. Some 53% admitted more than two-thirds of annual applicants. This included some well-known schools: St. John’s University in New York (67.7%), Virginia Tech (70.1%), Quinnipiac University (73.9%), University of Missouri at Columbia (78.1%) and George Mason University (81.3%). None of these were on a list of the hardest colleges to get into by state.

Despite many of the high admissions rates, they have fallen at a number of colleges. Pew reports that 45% of colleges in the survey had cut admissions rates by over 10% since 2002, the period over which Pew measured the trends. The reason was not necessarily that admissions offices had become more aggressive. A growing number of students apply to multiple colleges. Pew researchers point out that “In absolute numbers, schools are making more admission offers than before, but not enough to keep pace with the soaring number of applications.” Total applications to colleges covered by the research rose from 4.9 million in 2002 to almost 10.2 million in 2017. Applications are currently on the rise at 100 or more major schools.

Why have applications risen so fast? Pew believes that among the primary reasons is the so-called Common Application, which allows students to apply to numerous colleges at once. Of the research pool of 1,364 colleges examined, 729 used the Common Application as part of their admission process.

Pew pulled information on applications, admissions and enrollment from the Integrated Postsecondary Education Data System, a program of the research division of the U.S. Education Department’s National Center for Education Statistics. The analysis was restricted to schools for which there were data for both 2002 and 2017. 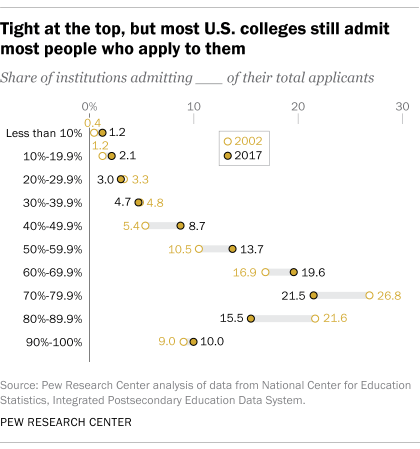