This Tiny North Dakota County Is the Fastest Growing in America

There are 3,142 counties in America. Among these, only one grew over 50%, according to a recent Census survey. It is a small county in North Dakota with only about 35,000 residents.

The new Census report, which covers city and county growth from the 2010 Census dated April 1, 2010, until July 1, 2018, is titled “New Census Bureau Estimates Show Counties in South and West Lead Nation in Population Growth.” Leading the list is Williams County, North Dakota, which grew 57.8% to 35,350. To be on the top 10 list in terms of growth, a county had to grow over 34% and had to have a population over 20,000. Interestingly, no county in North Dakota is among the 25 best counties in America to live in.

The study also ranked America’s 390 largest metro areas. The Dallas-Fort Worth-Arlington metro area added 131,767 people between July 1, 2017, and July 1, 2018. No other American city came close. The Dallas suburb of Highland Park also was recently listed as one of America’s 50 best cities to live in.

The total population of the Dallas metro area as of mid-2018 was 7,407,944, which ranked it fourth in population among all American cities. The three ahead of it were the New York-Newark-Jersey City metro with 19,979,477 people, Los Angeles-Long Beach-Anaheim with 13,291,486 and Chicago-Naperville-Elgin with 9,498,716. None of these three were on the Census list of the top 10 metros that added the most people.

24/7 Wall St.
This Texas City Is the Fastest Growing in America 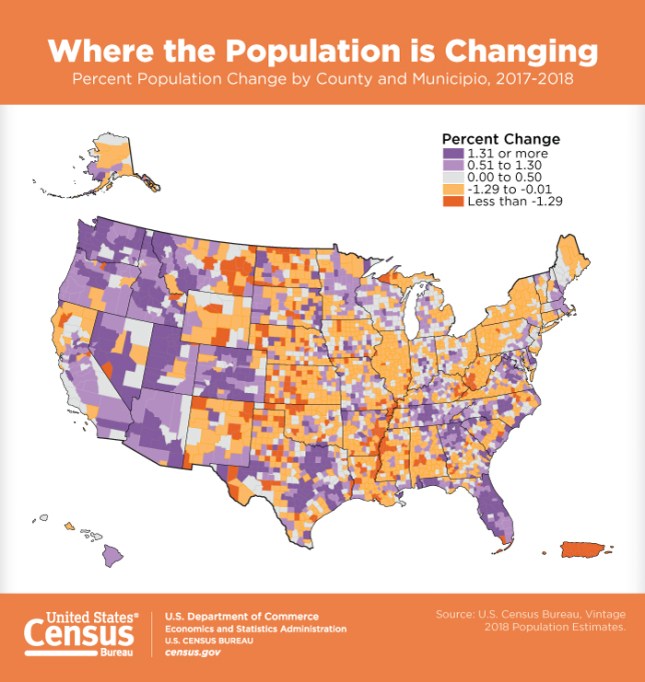