One Benefit of Record Flooding, Drought Levels in US Hit Historic Low

Researchers reported in 2015 that a drought that hit California and other parts of the west was “the most severe drought in the last 1200 years.” Some scientists believe that the region would never recover to a period when water tables were anywhere near normal. Lake Mead in Nevada, one of the largest lakes in the west, shrank to its lowest level in decades.

According to researchers at U.S. Drought Monitor, California is 94% drought free. In Nevada, the figure is 100%. And the trends are mirrored nationwide.

At the end of April, the Drought Monitor reported that drought levels were at their lowest level in 20 years. According to its scientists: “An active weather pattern maintained historically low drought coverage across the contiguous United States, with only a few areas currently experiencing dryness (D0) or moderate to severe drought (D1 to D2).” The worst drought levels are D3, which signifies “extreme drought,” and D4, which means “exceptional drought.” A map of much of the western United States five years ago showed much of it covered by D4 and D5 designations.

What caused the reversal? Massive rainstorms across much of the United States are one reason. Many were hurricanes. The North Carolina Institute for Climate Studies reported that three weather events between 2016 and 2018 posted the highest rainfall levels on record. Hurricanes Harvey and Florence topped the list. Harvey was among the most powerful hurricanes of all time.

Climate Central plotted rainfall levels across the United States in 2018. Much of the eastern U.S. had the largest amount of precipitation ever for a year, based on data that went back to 1895. Much of the Midwest had rain levels that were among the 10 heaviest years in the areas over the same period.

What has caused the turnaround from drought to floods, hurricanes and massive rain storms? Most scientists believe the reason is global warming. The National Climate Assessment used information from 300 experts to determine that “human activity” was to blame for most, if not all, of the changes.

For the time being, the United States is nearly drought free. If scientists are right, storm problems could get worst. Some of the worst floods in American history have happened in the 21st century. 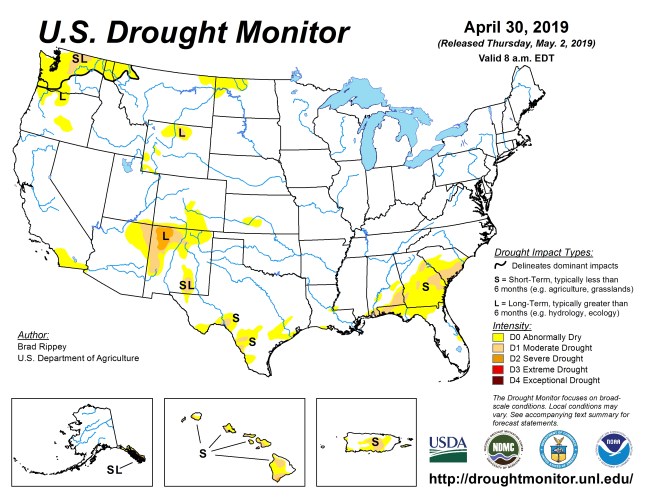