While calling the slowdown in global economic growth “largely a cyclical development,” the 36-member Organization for Economic Cooperation and Development (OECD) identifies five “structural reform priorities” to give economic growth the shot in the arm it needs in each OECD member nation.

The top five priorities have been identified through a complicated process that considers both performance indicators like productivity growth with policy indicators like regulation. Each OECD member country is then compared to other advanced and emerging economies.

Going for Growth points policymakers where to focus their efforts to boost growth, enhance the equality of opportunities and inclusiveness and improve environmental sustainability. Our key recommendation extends beyond the G7, to all OECD and key non-member economies: the time for reform is now, for better lives today and for future generations!

In its Country Note on the United States, the OECD notes with approval the country’s long-running economic expansion and 2017 reforms on corporate taxes. Then the analysis swerves into U.S. progress measured against the OECD’s top priorities could use some improvement.

Provision for public infrastructure (roads, public transit, etc.) “is not keeping pace with the evolving economy and the poor coordination of decisions across jurisdictions is contributing to congestion, urban sprawl, and environmental degradation.” In the OECD’s view, the United States has taken no action to improve in this area and needs to invest in new construction and maintenance promoting mass transit and improving access to fixed broadband service for all.

The United States also needs stronger labor market policies to retrain U.S. workers who do not have the skills that employers want. The OECD notes that here too the United States has taken “no action.”

U.S. equality of educational opportunity is the third area that needs to be improved according to the OECD, as does the efficiency of the healthcare sector. The following charts show how the United States stacks up. 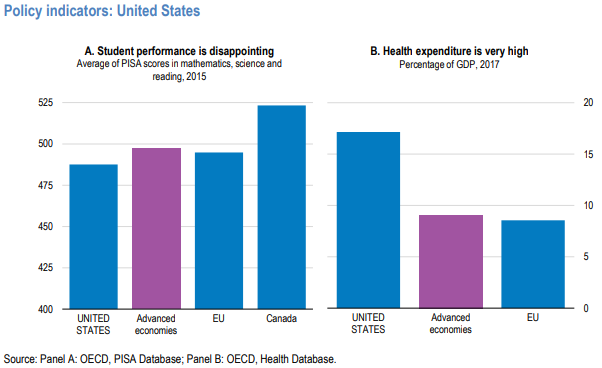 What’s odd about that recommendation is that many investor-owned utilities are either shutting down or selling off their merchant power business and keeping only their regulated businesses. The lower cost of adding renewable power generation remains mostly privately owned, but the generated power is being sold to states and localities. In order to privatize state-owned utilities, there has to be a buyer and those have been rather scarce.

Closing on a brighter note, U.S. inequality has dropped, according to the OECD, to a Gini coefficient of 39.1. That is still higher than the median (29.7) of the advanced economies. A lower score is better.

In its Economic Survey of the United States published last year, the OECD correctly estimated that U.S. GDP would rise by 2.9% in 2018 and projected 2019 GDP growth of 2.8%, a number that appears now to be out of reach. On Wednesday, for example, the Conference Board forecast U.S. GDP growth at 2.5% for this year, dropping to 2.0% in 2020.