The total student loan debt for more than 44 million U.S. student borrowers exceeds $1.5 trillion. On one hand, that’s a testament to an American students’ desire to invest in themselves and their futures. On the other hand, that debt demonstrates a public policy failure to invest in today’s students.

In 2017, the average student loan debt of the 58% of the year’s college graduates was an eye-watering $28,288. Graduates in some parts of the country are significantly worse off. These are the states where students graduate with the most debt.

According to the Demos report, Debt to Society, a typical white male borrower will have paid off 44% of his loan balance 12 years after beginning college. A typical black female graduate will have watched her balance grow by 13% and over half of black male graduates will have defaulted on their student loans within 12 years of beginning school. Default means that no payments have been made for nine consecutive months. 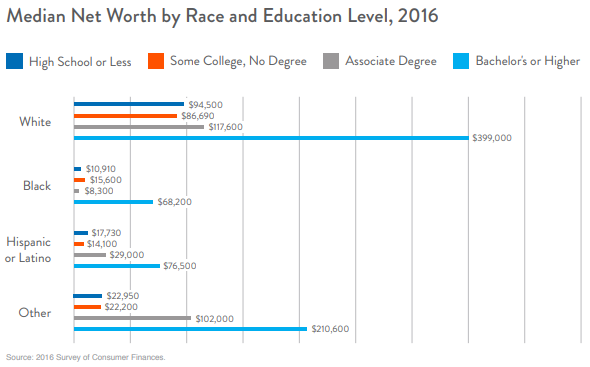 Public policy attempts to address student loan indebtedness under both the Bush and Obama administrations focused on income-driven repayment plans, where borrowers’ repayments are based on their income, reducing the chances of default. Loan balances typically are forgiven after 20 or 25 years of payments have been made.

But the revised pay as you earn (REPAYE) plans weigh far more heavily on middle-income black households than on middle-income white households. A typical white household with annual income between $24,000 and $120,000 has three times the financial assets of black households and more than six times the financial assets of a typical Latinx household. The following chart shows the effect of that inequality on a family’s monthly budget. 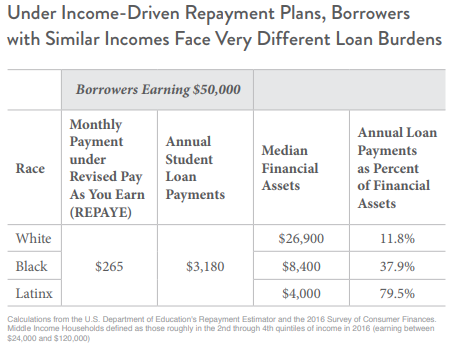 To redress that imbalance, policymakers have proposed several options. First, cancel all student debt for some and some student debt for all. The Demos report cites a New York Federal Reserve Bank estimate that 31% of borrowers with balances of $5,000 or less defaulted on a student loan within five years, compared to 20.4% of those borrowing between $25,000 and $50,000 and 17.2% of those borrowing more than $100,000. The low-balance default rate “almost certainly reflects” the struggles of students who took on debt but did not complete a degree. Senator Elizabeth Warren has proposed a plan of this sort as she campaigns for the Democratic presidential nomination.

Senator Bernie Sanders, also contending for the Democratic nomination, has proposed canceling all student debt and paying for it with the proceeds from a new wealth tax. The Demos report also summarizes four other public policy options.

What does the country gain if student loans are canceled? Among other things, according to a report published in 2018 by four economists for the Levy Institute of Bard College, U.S. real (inflation-adjusted) gross domestic product rises by $861 billion to $1.08 trillion over 10 years; the average unemployment rate falls by 0.22 to 0.36 percentage points over the same period; and in the first few years following cancellation 1.2 million to 1.5 million new jobs could be created.

The Demos report cites a 2018 survey from which the group concluded, “People understand that debt can scare someone away from going to or finishing college, and can prevent them from moving on with their life after school.” Americans “have taken on burdensome loans [and] should be given a chance to move on with their lives, to start families and businesses, and to contribute to the economy without being shackled by debt” resulting from “disinvestment [in higher education], insufficient grant aid, and minimal accountability for predatory college programs.” In 2017, the rate of Americans aged 18 to 34 living at their parents’ home was 34.6%. In some areas it’s even worse. These are the states where the most people still live with their parents.


ALSO READ: States Lifting the Most Children Out of Poverty
Get Our Free Investment Newsletter