Tuesday, November 20, marks a dubious achievement. It is the day that the income earned by a Hispanic woman will equal the pay earned by a non-Hispanic white male in 2018. Latinas had to work all of last year and nearly the first 11 months of this to earn as much as white men earned in the 12 months of 2018.

That calculation was reported on Tuesday by the Economic Policy Institute (EPI). According to EPI senior economist Elise Gould, Hispanic women “are subject to a double pay gap–an ethnic pay gap and a gender pay gap.”

Latinas are paid 53 cents for every dollar paid to a white male (using 2017 median annual earnings for full-time, year-round workers) and 56 cents compared to an average for all workers (not just full-time) in 2018. Adjusting for education, years of experience and location, an average Latina worker earns just 66 cents for every dollar a white male earns.

As the following table shows, at every education level, white men earn more than Hispanic women. Not only that but as educational level rises, the gap widens. A Latina with an advanced degree earns an average of more than $18 an hour less than a white male with the same educational level. Hispanic women with advanced degrees also earn less than white men with only college degrees. The gender income gap persists even though in some high-paying jobs women hold 40% or more of the positions —  these are the 20 worst-paying jobs for women. 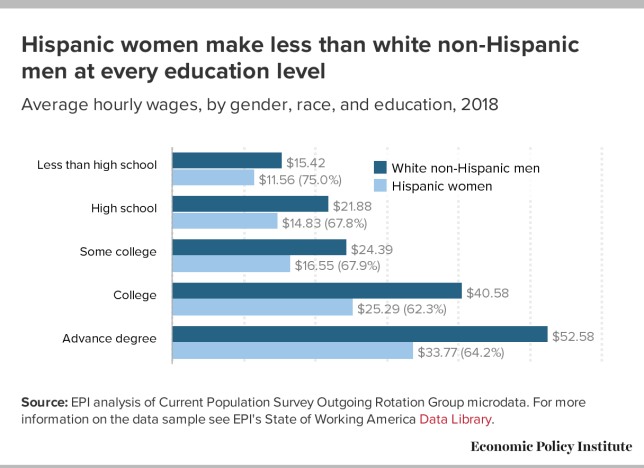 Here is how Gould accounts for the disparity: “Much of these differences are grounded in the presence of occupational segregation. Latina workers are far more likely to be found in certain low-wage professions than white men are (and less common in high-wage professions).” Despite the recent achievements in improving low wages, there are a number of companies today that pay near-poverty wages to a large share of their workers. 24/7 Wall St. has analyzed the 32 companies with the lowest-paying full-time jobs. 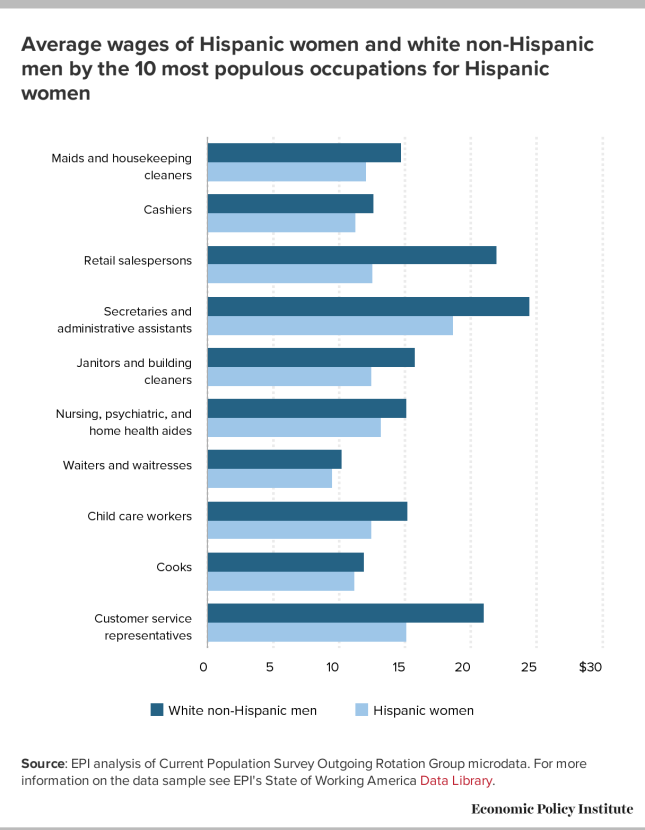 A rise to $15 an hour in the federal minimum wage by 2025 would boost the income of nearly one in three Latina workers, according to the EPI report, because they “continue to be over-represented in low-wage jobs.”

EPI’s Gould emphasizes the serious issues facing Latinas: “No matter how you slice the data, it is clear that there is a lot of work to be done to improve the standard of living for Latinas and their families.” More education would help, but not close, the gap. Better occupational choices would also help, but there too would be insufficient to close the pay gap. Gould concludes, “[I]t is important to strengthen workplace protections, like equal pay for equal work provisions, so that those women who do have the same education, the same occupation and are equally qualified in the workplace are not paid less or driven away from moving up to these higher paid positions.”