Consumer research firm Morning Consult reported Thursday morning that its consumer sentiment index slid from 100.96 on March 18 to 98.72 on March 19. This is the index’s first drop below 100 in the two years that the firm has been tracking consumer sentiment.

Based on its daily surveys, this marks an overall year-to-date decline of 14.52% since January 1. Since February 23, the index has dropped by more than 16 points. For the fourth consecutive day, the consumer sentiment index has fallen to its lowest level since tracking began.

John Leer, Morning Consult’s economist, notes the one-day drop of 2.83 points between Wednesday and Thursday is the largest in the history of the index. All seven of the largest daily declines have come in the past five days.

The following chart from Morning Consult speaks for itself. 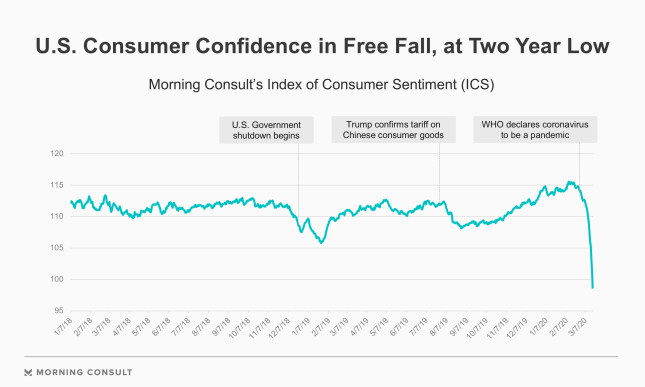 The Dow Jones industrials dropped below 20,000 on Wednesday and were barely trading up Thursday morning. The VIX volatility index reached 84.26 earlier this morning, not far from its 52-week high of 85.47 set on Wednesday.

As of early Thursday, more than 227,000 coronavirus cases have been reported worldwide. Nearly 9,300 people have died and almost 86,000 have recovered. More than 132,000 cases remain active and nearly 7,000 are listed as serious or critical.

The U.S. Labor Department reported Thursday morning that 281,000 Americans filed new claims for unemployment benefits, about 28% more than the 220,000 filings economists had projected. The week-over-week percentage increase of 33% (up 70,000) was the largest since 1992. When the Labor Department releases this report next week, the number is very likely to be significantly higher. By one estimate, global job losses could top the 22 million jobs lost in the wake of the 2008 financial crisis.