How China Set the Bar for Blunting the Coronavirus Outbreak

Chinese health authorities reported the first case of what is now called the COVID-19 on December 31 to the World Health Organization (WHO). By January 20, WHO had received reports of 282 cases in China, most centered around the city of Wuhan in Hubei province. By early February, more than 900 Chinese had died and more than 40,000 cases of the disease had been identified.

In reality, the first case of the novel coronavirus was reportedly discovered in early December. In the first several weeks following the discovery, the government followed its long-standing policy of first suppressing hard data about the outbreak, then trying to distract attention from the outbreak, and then lying to the country’s citizens about it. In late December, the government suppressed a report on the disease from eight Chinese doctors, including Dr. Li Wenliang, who died in early February after contracting COVID-19.

For all its mishandling and outright lying, though, Chinese authorities are widely praised for the way they handled the outbreak once they began to take it seriously. In a blog post from the International Monetary Fund (IMF) published Friday, three of the organization’s Asia specialists offered this praise: “China’s experience so far shows that the right policies make a difference in fighting the disease and mitigating its impact—but some of these policies come with difficult economic tradeoffs.”

The IMF’s authors point out that the outbreak not only brought “terrible human suffering” to Chinese citizens but “significant economic costs” as well. The curbs on citizens’ movements and strictly enforced curfews did help slow the spread of the coronavirus. It has also brought the country’s economy a severe hit to retail sales and industrial production. 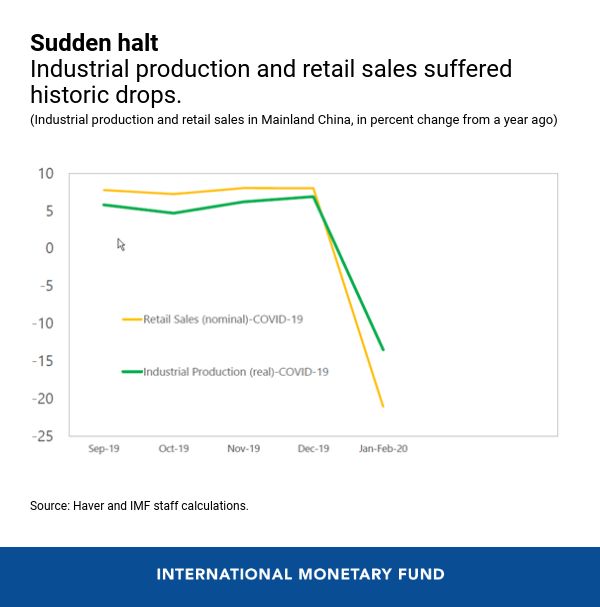 The following chart from the IMF shows how the strict measures adopted in Hubei compare with measures taken in the rest of the country. On Thursday, for the first time since January, no new local infections were reported in China. A total of 34 new infections were attributed to foreigners who were visiting the country. 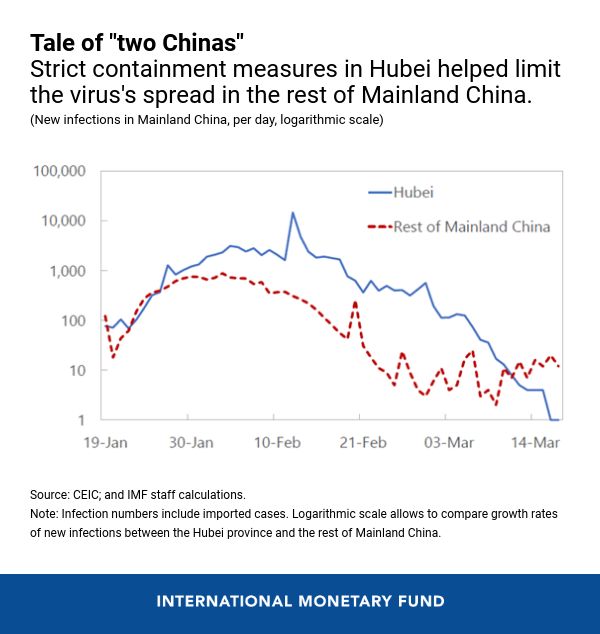 According to the IMF, Chinese authorities targeted financially vulnerable households for help by waiving social security fees and utility bills and providing easier access to credit. Policymakers also made it easier for Chinese firms to get credit to ramp up production of medical equipment and to fund other critical activities related to the outbreak.

On the financial system front, state and local authorities:

… stepped in early to backstop interbank markets and provide financial support to firms under pressure, while letting the renminbi adjust to external pressures. Among other measures, this included guiding banks to work with borrowers affected by the outbreak; incentivizing banks to lend to smaller firms via special funding from China’s central bank; and providing targeted cuts to reserve requirements for banks. Larger firms, including state-owned enterprises, enjoyed relatively stable credit access throughout—in large part because China’s large state banks continued to lend generously to them.

China is not out of the woods yet, though, and the spreading pandemic could create greater economic risks for the country. The IMF concludes:

Chinese policymakers will have to be ready to support growth and financial stability if needed. Given the global nature of the outbreak, many of these efforts will be most effective if coordinated internationally.

The U.S. Senate on Thursday rolled out a proposed $1 trillion economic stimulus plan that would follow the general pattern of the actions that China took when it, too, finally acknowledged the coronavirus outbreak. About half the money would go to individuals and the other half would be low-interest loans to distressed industries like airlines and forgivable loans to small businesses.

The Federal Reserve has chopped its federal funds rate to a range of 0.00% to 0.25% and pumped hundreds of billions of dollars into liquidity to keep the financial system running more or less smoothly.

It seems that the rulebook has apparently been written by the Chinese, and the IMF is lauding it as a pattern for other countries that are or soon will be facing their own outbreaks.