These Are the 15 States With the Most Wildfire Risk

Over the past two years, more than 96% of all acres burned were located in 15 states, according to a new report on wildfire risk from CoreLogic. Those states are Alaska, Arizona, California, Colorado, Florida, Idaho, Montana, New Mexico, Nevada, Oklahoma, Oregon, Texas, Utah, Washington and Wyoming.

As Americans move closer to the frontiers (called the wildland-urban interface or WUI), they are moving closer to the forests, brush and grasses that provide fuel for destructive fires. Combined with higher temperatures and lower humidity, wildfire risk is rising all across the country, but the risk remains greatest in the wide-open spaces of the West.

The following map from CoreLogic’s September 2020 Wildfire Report shows the average land area burned over the past 20 years in every state. With the exception of Florida, the most at-risk states are located in the West or Southwest, with Alaska seeing the highest average acreage burned over the 20-year period. 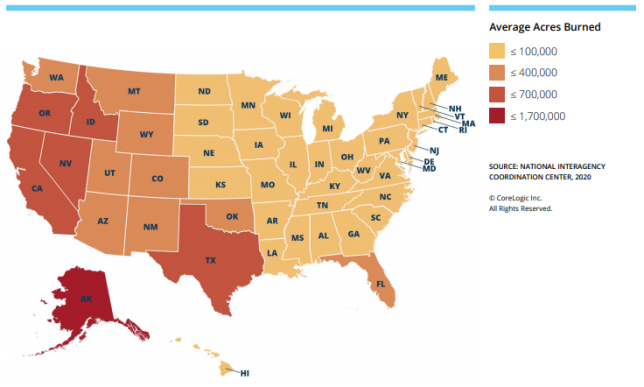 The total reconstruction cost value (RCV) of single-family homes facing moderate risk is $105.6 billion, while the RCV of homes determined to face high risk is $312 billion and the RCV of homes at extreme risk is $220.6 billion. The total for these three risk levels is $638.1 billion. For multifamily residences, the RCV for homes at moderate to extreme risk levels is $6.2 billion.

RCV is not the same as replacement cost. Homeowners may be underinsured if their policy is based on a replacement value rather than a reconstruction value, according to CoreLogic.

Another factor for homeowners to keep in mind is the time required to rebuild. Northern California’s 2017 Tubbs fire destroyed 3,043 housing units. As of June, less than half (1,282) had been completely rebuilt.