In 2009, there were just three Atlantic storms that earned the hurricane monikers — Bill, Fred, and Ida. None of these storms made landfall in the US as hurricanes. The predictions from Colorado State University researchers are not so sanguine for 2010.

They forecast eight hurricanes in the Atlantic Basin in 2010, four of which could be a major storm (Category 3 or higher). There is a 58% chance that one of the major storms will enter the Gulf of Mexico, and the probability that one of those will hit the Gulf coast from the Florida Panhandle to Brownsville, Texas is 44%. For the past hundred years, that probability has been 30%, so this year’s chances are way up.

Last year’s mild hurricane season is attributed to “moderate” El Nino effects in the Atlantic that are expected to be “neutral” this year. That change, coupled with a “strong anomalous warming of the tropical Atlantic”, lead to this year’s forecasted increase in storms.

The Gulf coast of the US, from the Florida Panhandle to Brownsville, is home to more than 3,500 active platforms, 98% of which work in less than 200 feet of water. The density of oil and gas rigs is highest off the Louisiana coast, and, in addition to the platforms, there are gathering systems and pipelines spider-webbed throughout. 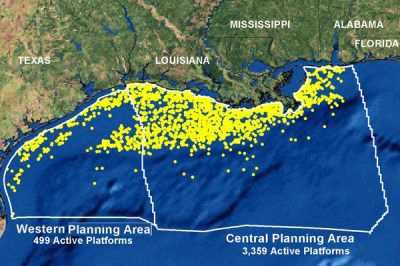 The largest semi-submersible platform in the world, Thunder Horse, operated and 75%-owned by BP plc (NYSE:BP) and 25%-owned by Exxon Mobil Corp. (NYSE:XOM), is located 150 miles southeast of New Orleans in more than 6,000 feet of water. The platform produces about 250,000 b/d of oil and 200 million cubic feet per day of natural gas.

In 2005, Hurricane Dennis hit this platform and a 6-inch water pipe in the ballast system failed, causing the platform to list severely.

The platform was righted about a week later, and was struck full-on by Hurricane Katrina six weeks later. Katrina did no damage to the platform. Thunder Horse was not in operation at the time, but its start-up was delayed until June 2008, partly as a result of storm damage.

Remarkably, given the miles of pipeline and number of production platforms and the 1.3 million b/d produced in the Gulf, only a relatively tiny amount of oil has been spilled as a result of these storms.

Storms are even a greater threat to US refineries, about half of which are located in the Gulf coast area. Valero Corp. (NYSE:VLO), Marathon Oil Corp. (NYSE:MRO), ConocoPhillips Corp. (NYSE:COP), and Motiva, a 50-50 joint venture between Royal Dutch Shell plc (NYSE:RDSA) and a division of Saudi Aramco, all own or operate refineries in along the Gulf coast of Texas and Louisiana. Capacity at Texas refineries exceeds 4.7 million b/d, and capacity of Louisiana refineries total about 3 million b/d.

When refineries are shut down to prevent in advance of a hurricane, it can take up to two weeks to get the plant up and running again. Following Hurricanes Ike in 2008, which shut down 20% of the US refinery capacity, gasoline shortages occurred throughout the southeast US. 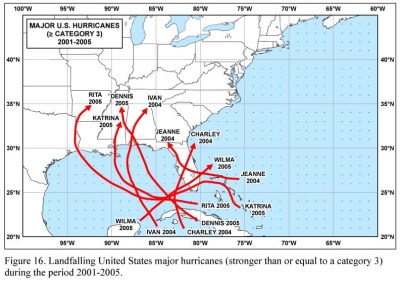 The most vulnerable part of the oil & gas infrastructure in the Gulf is the pipeline system. There are more than 33,000 miles of pipelines that gather and transport crude oil and natural gas to onshore processing facilities. Katrina and Rita combined to shut-in 64 pipelines that were 20-inches or larger in diameter, and more than 450 pipelines were damaged by the two storms. It takes weeks or months to inspect and repair that system, virtually all of which is underwater.

The production platforms themselves have held up well in the big storms of recent years. Katrina and Rita together only destroyed one platform, and it was one built on an old design.

Following the storms of 2005, the offshore industry began pre-placement of repair equipment that is intended to get repairs started sooner and production ramped up quickly. That helped somewhat during the 2008 hurricane season, but the problem of course is that it’s impossible to have the right equipment everywhere.

The predicted 2010 hurricane season which runs from June 1 through November 30 could rival the 2005 season, if the Colorado State forecasters are correct. If that forecast turns out to be correct, the fragile economic recovery could be knocked down again, and oil prices, already rising steadily, could take off even more.