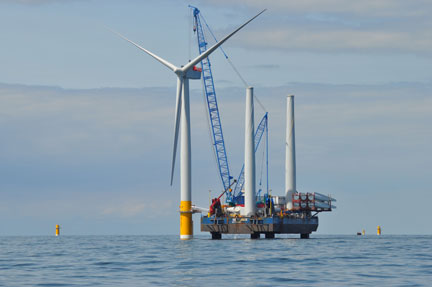 Construction and engineering firm Fluor Corp. (NYSE:FLR) has revealed that the company will take a charge of about $163 million, or -$0.90/share, against its third quarter results due to projected cost increases on the Greater Gabbard Offshore Wind project it is building in the North Sea. The company won a $1.8 billion fixed-price contract to build the 500 megawatt project in 2008. It is scheduled for completion in early 2012.

The project uses 140 turbines from Siemens AG (NYSE:SI), of which Fluor has installed 53 to date. When the Greater Gabbard project is completed it will be the largest offshore wind farm in the world. But probably not for long as the UK has issued licenses for nine additional North Sea wind farms ranging in size from 600 megawatts up to a staggering 9,000 megawatts. Siemens, General Electric Co. (NYSE:GE), and other turbine makers have committed to locating plants in the UK to build the thousands of turbines that will be needed for this effort.

Fluor attributed $163 million charge to “a variety of execution challenges.” These included material and equipment deliveries related mostly to installing generators and cabling. The charge comprises “substantial costs” for additional marine vessels and related subcontractor costs, equipment repairs, and an estimated charge for “schedule impact”. The company says it “has taken a number of remedial actions to mitigate further cost escalation and delays to the schedule.”

As more and more offshore wind is developed, especially in the North Sea, competition for the sea-going vessels required to build the platforms and install the turbines will increase, as will competition for materials like cables to connect to the several turbines in a project to a central platform and then to the onshore grid. Governments will want to work from fixed-price contracts and construction companies will seek cost-plus contracts in an effort to prevent the cost overruns and delays that just hit Fluor.

Turbine makers like Siemens, GE, Vestas, and, very likely, Chinese companies like China Longyuan Power Group and Xinjiang Goldwind that are quickly ramping up manufacturing capability and technological expertise will all compete for these projects. Wire providers like American Superconductor Corp. (NASDAQ:AMSC) and General Cable Corp. (NYSE:BGC) and construction companies like Fluor and ABB Ltd. (NYSE:ABB) with experience in grid connections will also be in big demand.

Fluor’s shares have lost more than 5% this morning on very heavy volume.