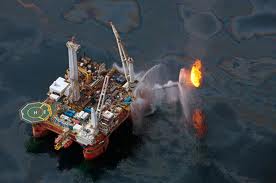 Ton Hayward, disgraced former CEO of BP plc (NYSE: BP), defended the day he spent yachting which was at the peak of the disaster’s effects. In an interview with the BBC, he said “I hadn’t seen my son for three months, I was on the boat for six hours… I’m not certain I’d do anything different. I wanted to see my son.”

The men who died during the explosion of the Deepwater Horizon will not see their children again, and many people who were involved in the clean-up were probably away from their families for weeks, perhaps months.

The Hayward interview shows how far he is removed from reality, even after being excoriated by the press, the US government, and BP shareholders. Hayward never appeared much concerned over the fallout of the catastrophe although he claimed he was on many occasions.

It is easy to see why BP removed Hayward from his post as CEO. He was not only less than competent as he handled the Deepwater Horizon problem. He said early on that the leak was not a  large problem. He also proved he had a tin ear with regard to concerns voiced by the residents of the Gulf region and scientists who examined the growing environmental problems caused by the leak.

Anyone who wonders if Hayward is best off gone only needs to listen to his talk with the BBC.