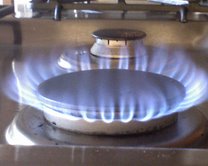 US shale gas deposits were known to have existed for decades. The problem was how to turn them into flowing wells. The natural gas was tightly compressed into small pockets in virtually impermeable rock. In the late 1990s, a small company called Mitchell Energy figured out how to fracture the rock and get the gas flowing. That happened in the Dallas-Fort Worth area in a gas deposit known as the Barnett shale.

Drilling began in the Haynesville shale in about 2008 and the area is now dotted with wells drilled by more than two dozen companies. The following list names the 15 largest publicly traded companies by their net acreage holdings in the Haynesville shale as reported on their 2009 annual reports. Net acreage is equal to wholly-owned leases plus participation shares in jointly held leases.

Plains also owns 20% of Chesapeake’s interest in the Haynesville shale. Exxon got its share of the play with its purchase last year of XTO Energy.

Three pipeline companies also have extensive operations in the Haynesville play. Kinder Morgan Energy Partners, L.P. (NYSE: KMP) owns a 50% share of a joint venture with PetroHawk, which owns and operates a pipeline and gathering system that will handle more than 800 million cubic feet/day by the end of 2010. Energy Transfer Partners L.P. (NYSE: ETP) is completing the Tiger Pipeline, a 175-mile, 42-inch interstate pipeline that will interconnect with other interstate pipelines to haul the gas to the east and northeast US. DCP Midstream Partners LP (NYSE: DPM) owns and operates some 4,660 miles of gathering and transport pipeline in the Haynesville play.

Oil field services companies also participate by providing the high pressure pumping systems and fluids that break up the shales and allow the gas to flow to the surface. Halliburton Co. (NYSE: HAL), Schlumberger Ltd. (NYSE: SLB), and Baker Hughes Inc. (NYSE: BHI) are among the players here.

The fracturing techniques and the fluids used to force the cracking have come under some scrutiny. The services companies have long held that their fluid formulas are proprietary, and they have refused to give up the exact formulas for the fluids. Some localities and environmental groups are trying to force the companies to release the formulas in order to determine if the chemicals are making their way into local drinking water supplies.

General Electric Co. (NYSE: GE) has recently introduced a new mobile fracking solution in what appears to be a giant opportunity in what the company called “energy efficient, fully transportable, cost effective and that it will enable onsite frac water recycling.”

Haynesville and other natural gas regions have been highlighted in many documentaries and many articles of late.  Some are favorable, some are very critical.  T. Boone Pickens and others are also touting natural gas as the bridge fuel that can get America off of foreign energy dependence.  This is work in progress with an unfinished outcome.  There are billions upon billions of dollars at stake.