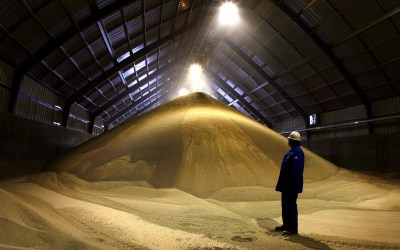 Agribusiness giant Syngenta AG (NYSE: SYT) has gotten approval from the US Department of Agriculture to grow a strain of corn that has been genetically modified to make it  cheaper and more energy-efficient to produce ethanol. Whether the new corn will be a big success for Syngenta depends mostly on demand for ethanol.
The modified seed, called Enogen, contains a gene that allows it to produce an enzyme to break down the starch in corn into sugar. This breakdown is currently done by adding a liquid form of the enzyme to corn at the beginning of the ethanol production process.

Not everyone is happy about this. There are of course those groups that oppose genetically modified food in any form. But food producers like General Mills Inc. (NYSE: GIS) point out that if Enogen is mixed with other types of corn in food processing, it alters the quality of the food produced. The US Food and Drug Administration has already approved Enogen as safe to eat.
The idea behind Enogen is that it will be grown near ethanol plants under contract and that farmers would be given financial incentives to sell the Enogen only to the nearby plant, according to The New York Times.  The use of Enogen will start small, about 25,000 acres, but because nearly 40% of the US corn crop now goes to ethanol production, the number of acres devoted to Enogen is sure to rise rapidly.
The tax reform bill that was enacted in December includes a $0.45/gallon subsidy for ethanol production and as long as the US government continues to support corn-ethanol production there will be more developments like Enogen to encourage producers to belly-up to the trough. US corn stockpiles are expected to fall by 13% in the current crop year, to a 13-year low.
Globally, some 15% of total corn production this year will be used to produce ethanol. The debate over food vs. fuel will heat up again as stockpiles fall and prices continue to rise. The recent US EPA approval for a 15% ethanol blend to fuel cars built after 2001 is also expected to put more pressure on corn prices.
The Congress needs to re-think its mandate on ethanol use as motor fuel and its decision to pay an unnecessary subsidy that only increases demand for corn. As long as demand for ethanol continues to grow due to government interference, more products like Enogen will continue to be developed.
Paul Ausick