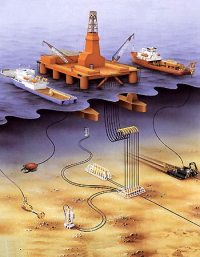 Two pipeline companies have agreed to a 50-50 joint venture to build a new 149-mile offshore gathering system in the Gulf of Mexico. Enterprise Products Partners L.P. (NYSE: EPD) and Genesis Energy LP (NYSE: GEL) will build the system and Enterprise will be the operator.

The joint venture, called the Southeast Keathley Canyon Pipeline Co. LLC (SEKCO), plans to build an 18-inch pipeline to transport 115,000 barrels/day of crude to a floating production platform and connect to Enterprise’s Poseidon pipeline system to move the oil onshore. The southeast portion of Keathley Canyon is estimated to hold about 300 million barrels of reserves.

In related transactions, Genesis is acquiring a 28% stake in the Poseidon pipeline system from Marathon Oil Corp. (NYSE: MRO), as well as a 29% stake in the Odyssey pipeline system which is majority owned and operated by Royal Dutch Shell plc (NYSE: RDS-A) and a 23% stake in the Eugene Island pipeline system owned by a group including Exxon, Shell, Chevron Corp. (NYSE: CVX), and ConocoPhillips (NYSE: COP). Genesis is paying about $206 million for these three acquisitions, which includes about $26 million for the value of the crude already in the pipelines. The company used its revolving credit facility to finance the purchases.

The SEKCO pipeline system is expected to be in service by mid-2014.