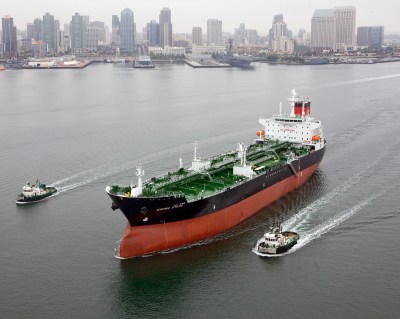 This question may seem odd on the surface, considering that Kinder Morgan will now reincorporate three very large MLP structures, but these transactions are expected to close on Wednesday, November 26, 2014, after a November 20 vote. At issue is that Kinder Morgan’s entities will be part of the “Inc.” rather than the alternative structures that make up the MLPs.

24/7 Wall St. has noted on multiple occasions that there are literally billions of dollars in closed-end funds and in ETFs that track MLPs. If the MLP-tracking sector does decide to keep Kinder Morgan Inc. shares in the portfolio, it is a big deal. If not, it is still a big deal.

Richard Kinder is effectively paying some $40 billion in stock and $4 billion in cash for the three entities. Still, the latest pre-merger document shows the total purchase price as $75.6 billion, if you include the $27 billion in assumed debt. Pre-merger market caps as of Wednesday were: Kinder Morgan Energy Partners at $45 billion, Kinder Morgan Management at $13.5 billion and El Paso Pipeline Partners at $10 billion.

So, back to the MLP holdings of a post-merger Kinder Morgan by ETFs and mutual funds.

The Alerian MLP ETF (NYSEMKT: AMLP) had assets worth over $9.5 billion as of November 18. It turns out that Kinder Morgan Energy Partners had a 10.12% weighting, implying a holding value of more than $950 million in just the one entity. El Paso Pipeline Partners had a weighting of 2.96%, which implies a total holding of almost $285 million.

JPMorgan Alerian MLP ETN (NYSEMKT: AMJ) is an exchange traded note rather than a classic ETF, which means that holdings could in theory be derivatives or other instruments that track the Alerian MLP Index. Its market cap as of November 18 was just over $6.5 billion, and it also tracks the Alerian MLP Index. It listed Kinder Morgan Energy Partners with a 9.59% index weighting aa the second largest constituent.

24/7 Wall St. spoke with a representative of Kayne Anderson, and the firm would not comment on details of the holdings. They referred us to the latest prospectus, which said, “Our investment objective is to obtain high after-tax total return by investing at least 85% of our total assets in public and private investments in MLPs and other Midstream Energy Companies.” Then there are further details of the investment policy that allows for a wider discretion that even includes private issuers and other securities.