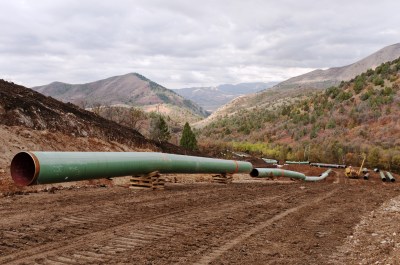 Source: Kinder Morgan Inc.
Midstream companies Magellan Midstream Partners L.P. (NYSE: MMP) and Plains All American Pipeline L.P. (NYSE PAA) said Wednesday morning that a wholly owned subsidiary of Anadarko Petroleum Corp. (NYSE: APC) has exercised its option to acquire a 20% stake in the Saddlehorn Pipeline, a joint venture that had been previously shared by Magellan and Plains. Each is selling 20% of its existing 50% stake to Anadarko. No financial data were disclosed.

Saddlehorn Pipeline is proposing a 550-mile pipeline to transport crude oil from the Denver-Julesburg, Colo., (DJ) basin to storage facilities owned by Magellan and Plains at Cushing, Okla. The 20-inch pipeline will have a maximum capacity of 400,000 barrels a day, but initial capacity is targeted at around 200,000 barrels a day. The pipeline is expected to cost $800 million to $850 million to construct and is expected to be operational by the middle of 2016. Magellan is the construction manager and will be the pipeline operator.

The DJ basin includes a large shale formation called the Niobrara, which is among the most productive shale oil plays in the U.S. Anadarko and Noble Energy Inc. (NYSE: NBL) are the largest operators in the region.

A year ago there were 54 wells in the DJ-Niobrara play, but that number has dropped to 32 as of last Friday. Anadarko said earlier this month that it was cutting its 2015 capital expenditure budget by about 33% from 2014 levels and will spend about 60% of its estimated $5.4 billion to $5.8 billion capital budget on U.S. onshore projects, about 40% less than it spent in 2014. The company said it will not complete about 125 wells in the DJ Basin and the Eagle Ford and Permian basins in Texas.

Like every other oil company, Anadarko is looking at the current downturn in the oil market as a cyclical event that will end with a return to a more robust market. When that day comes, the company wants to be able to get its oil out of Colorado and, it probably hopes, on a tanker headed for a foreign country that will pay higher than U.S. prices for the black stuff. Taking a share of Saddlehorn gives Anadarko some influence over its future.

West Texas Intermediate crude traded down about 2.6% Wednesday morning to $42.33, after dropping to $42.05 earlier.