At full-production, Liza-1 is expected to yield 120,000 barrels of oil a day. A second development, Liza-2, includes a second FPSO, the Liza Unity, with a capacity to produce up to 220,000 barrels of oil per day and front-end engineering design is underway for a potential third FPSO, the Prosperity, to develop the Payara field once the company receives government and regulatory approvals. Exxon anticipates that by 2025 at least five FPSOs will be producing more than 750,000 barrels per day from the Stabroek Block.

The Payara field, north of Liza, awaits government approvals and project sanctioning that could start production as early as 2023, reaching an estimated 220,000 barrels of oil per day.

The following map from Rystad Energy Ucube shows the location of the Liza and Payara fields, along with other fields in the Stabroek block. 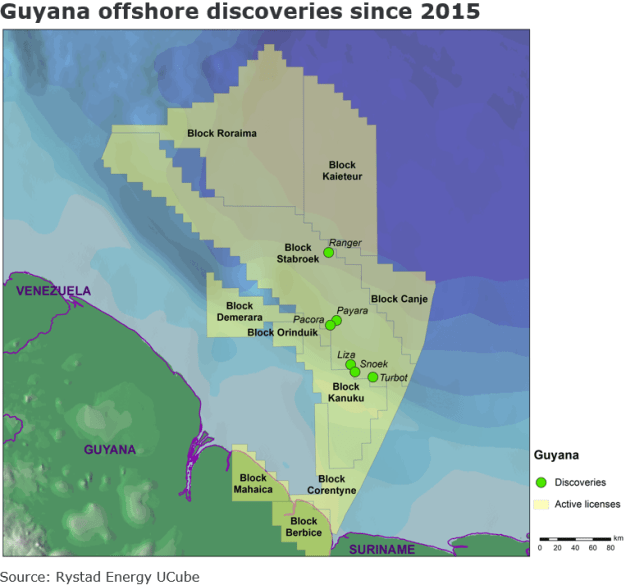 Rystad Energy, in April 2018, estimated that total production in Guyana’s offshore deposits could surpass 600,000 barrels a day by the end of the 2020s. The discoveries could generate as much as $15 billion annually with a profit of about $10 billion to a calculated split of 60-40 (60% to the government). That is far more generous to the producers than, say, offshore Nigeria production for which the government takes about 85% of the profit.

The following map from Seeking Alpha’s The Natural Resources Hub indicates the leaseholders in each of the eight blocks that have so far been leased. 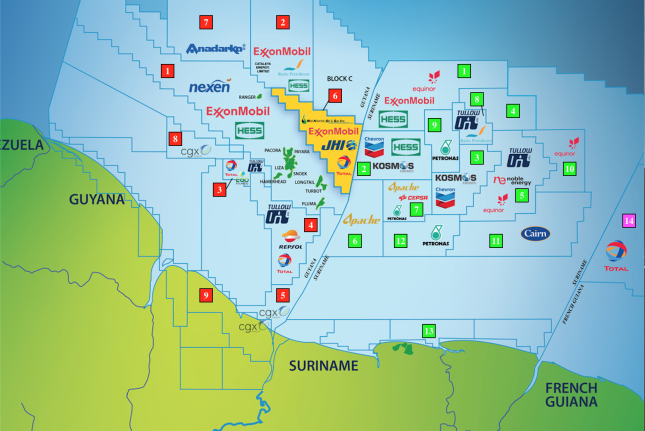 Source: Seeking Alpha The Natural Resources Hub
ALSO READ: After a Strong 2019, Are There Any Undervalued Defense Contractors?
Get Our Free Investment Newsletter