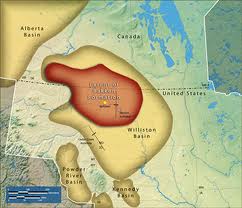 That size of this resource has been lost during the discussion of whether the price of oil will shut down fracking in the region. Eventually, as global demand for crude continues at or near historical highs, the oil from the region will be produced and shipped to refineries. And with the price of oil moving back up, that could happen sooner and not later.

One sign of the possible contribution of the formation is the amount of oil that comes out of North Dakota each day. The formation covers much more than just the state, which makes the yield of North Dakota a major indicator of what the entire geographic area of the formation may produce. North Dakota has become the second largest oil producing state in the United States, according to the U.S. Energy Information Administration. The figure is currently estimated at 1.17 million barrels a day. The leader among states is Texas at 3.46 million barrels.

Much of the analysis of the future of the Bakken Formation swings on what OPEC will do with supply and prices, and a means to cripple the fracking industry, and thus eventually undermine supply from the United States. Arab News recently reported:

Petroleum and Mineral Resources Minister Ali Al-Naimi told fellow OPEC members in Vienna that they must combat the US shale oil boom, arguing against cutting crude output in order to depress prices and undermine the profitability of North American producers.

The price of crude was $72 the day of that statement, on its way down to $45 for West Texas Intermediate (WTI) crude. However, since then the price has recovered to $60 and may rise much further. For each step it takes back toward $95, which was its 52-week high, presumably drilling and production come back online in North Dakota and other states and provinces that cover the Bakken Formation.

For a time, analysts believed that fracking would be an impossible way to make money. The Bakken Formation drilling would lie dormant. That period may be very short-lived, and efforts to extract the 6 billion barrels we are certain about will start again.