Gas Prices Jump Above $2 in 42 States

The average price for a gallon of regular gasoline reached $2.20 recently, up from $2.04 a month ago and $2.56 a year ago. The benefit of cheap oil has started to disappear, and 42 states have prices above $2. Only a few oil-rich states, or those near huge refineries, have prices below that. Some of these also benefit from low state gas taxes.

The state with the most expensive gas is California at $2.78 per gallon. That is extremely high compared to the next lowest, which is Hawaii at $2.59. Most of the most populated states have high gas prices: Pennsylvania at $2.36, Illinois at $2.35, New York at $2.33, Ohio at $2.32 and Michigan at $2.32. Only Texas has a low average gas price among the largest states ranked by population. The price in the state is $1.95, the second lowest in the United States, according to GasBuddy.

Over the past four months, the price of oil has risen from below $30 at the start of the year to $46 recently, a rise of 53% in less than six months. Oil may not fall soon and could spike higher. Apparently some oil-rich countries have had such large drops in the income from crude that the asset value of their national treasuries has been eroded. All those countries need higher prices to sustain their economies. Another primary factor is that the supply from U.S. frackers has dried up because many of these producers need high prices to fund their operations.

Based on the current trend, all 50 states will have gas prices above $2 soon. 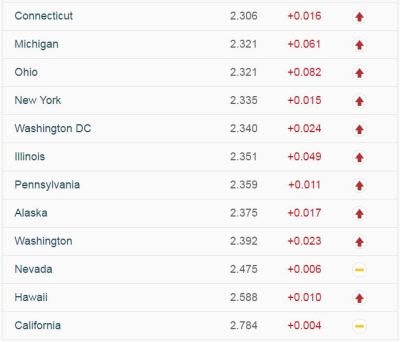