Why Does the IEA Always Underestimate Solar Energy's Rapid Growth?

Baseball philosopher Yogi Berra once said, “It’s tough to make predictions, especially about the future.” That doesn’t stop people from making them, mostly because predictions going out years or decades are long forgotten when the predicted time arrives.

A research engineer at Eindhoven University of Technology in The Hague, Auke Hoekstra, decided to check up on the International Energy Agency (IEA) and its predictions for the rise in solar photovoltaic (PV) installation.

Using data from the agency’s World Economic Outlook (WEO) for 13 of the past 16 years, Hoekstra graphed the actual growth of solar PV installation (the thick black line on the following chart) against the IEA predictions from the WEO. 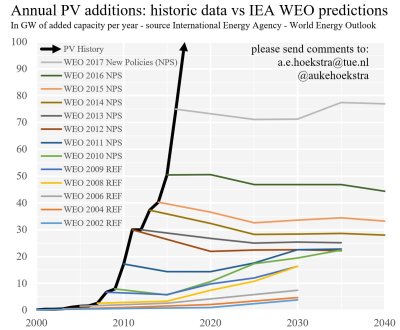 The starting point for each year’s new prediction moves higher and in some years sharply higher. Hoekstra notes that “every single time since the future of photovoltaics was first predicted in the IEA WEO in 2002, the WEO has assumed the sector would hardly grow or even contract, even though this runs contrary to the observed reality.”

Because the IEA’s WEO is a widely used source for policy makers around the world, consistently underestimating the growth of solar PV when the data say otherwise discourages investment in solar and can hold back even faster growth.

Hoekstra, in a blog post last June, offers some possible explanations for the IEA’s low and inaccurate predictions:

A more detailed look at Hoekstra’s analysis and conclusions is available in this October post.

BP's Q3 Earnings Are All About Dividends, Not Oil

These 17 States Have Gas Prices Under $2