The EPA report includes data on 13 of the largest automakers selling vehicles in the United States. Of that group, 12 improved both fuel-economy ratings and GHG emissions rating over a five-year period between model years 2012 and 2017.

Preliminary data for model year 2018 vehicles suggest an improvement of 0.5 mpg in fuel economy and a drop of 8 gpm in emissions.

The automaker with the best fuel economy and the largest drop in GHG emissions for the five-year period is Honda with a fuel-economy rating of 29.4 mpg, up from 26.3 in 2012, and GHG emissions of 302 gpm, down from 338.

Fiat Chrysler had both the worst fuel-economy rating of any carmaker and the worst GHG emissions. Fuel-economy increased from 20.1 mpg in 2012 to 21.2 mpg in 2017. GHG emissions fell from an industry-high of 443 gpm to 420 gpm, still the worst among the 13 automakers the EPA reported on.

Here’s the EPA chart showing the change in fuel economy and emissions over the five-year period. 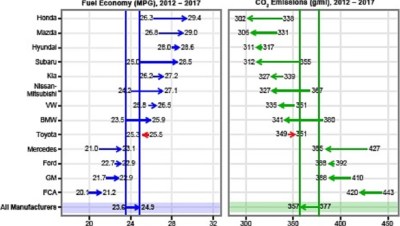 EPA Administrator Andrew Wheeler said, “Today’s report shows that while the auto industry continues to increase fuel economy, there are legitimate concerns about the ability to cost-effectively achieve the Obama Administration’s standards in the near future.”

The Obama administration and automakers who sell vehicles in the United States agreed in 2012 to a fleet average fuel efficiency rating in the range of 40.3 to 41.0 mpg by model year 2021, rising to 54.5 mpg by 2025. The Trump administration wants to roll back that agreement while automakers that have invested billions in increasing fuel efficiency and emissions are reluctant to agree.

A Wednesday report from Bloomberg News describes a recent conference call between Trump administration officials and auto industry executives during which the industry was given a choice of supporting the administration’s proposed rollback of fuel economy and emissions standards or “risk President Donald Trump’s wrath.”

The current administration has proposed capping auto carbon emissions standards and freezing fuel economy requirements at 37 miles per gallon after 2020 for the next two years. The state of California, which federal law allows to maintain stricter rules on mileage and emissions, has threatened to sue the federal government if it’s exemption is eliminated by the Trump administration.

Automakers have been clear that they want the administration and California to agree on the standards. Such a solution does not appear likely at this point.