Just in time for the long July 4th holiday weekend, U.S. gasoline prices are once again on the rise. By Independence Day, industry analysts at GasBuddy expect the national average price for a gallon of regular gas to cost $2.75, 10 cents a gallon more than a week ago.

Gasoline prices had declined for seven straight weeks, but a confluence of events last week put an end to all that. GasBuddy’s head of petroleum analysis, Patrick DeHaan, noted, “The stage was set for a nearly perfect holiday–gas prices hit their 7th straight weekly decline, oil prices had dropped as low as $51, every state had seen notable declines at the pump, it really couldn’t get a whole lot better as we approach July 4th.”

The low-price regime began to unravel about two weeks with the attack on two crude oil tankers in the Gulf of Oman. The attack, which the United States has blamed on Iran, got the ball rolling, driving crude from its low of $51 a barrel on June 13, the day the ships were attacked, to more than $59 at last Friday’s close.

An explosion and fire at the Philadelphia Energy Solutions refinery a week later has taken 335,000 barrels a day of crude oil processing out of circulation and, according to an announcement last week, will close the venerable refinery for good.

The final straw may have been Saturday’s announcement by Russian President Vladimir Putin and Saudi Crown Prince Mohammed bin Salman that OPEC+ will maintain its 1.2 million barrel per day cut in production at least through the end of the year and, perhaps, longer.

The following chart from GasBuddy shows the national average price for a gallon of regular gas over the past 10 years along with its estimate for this year. 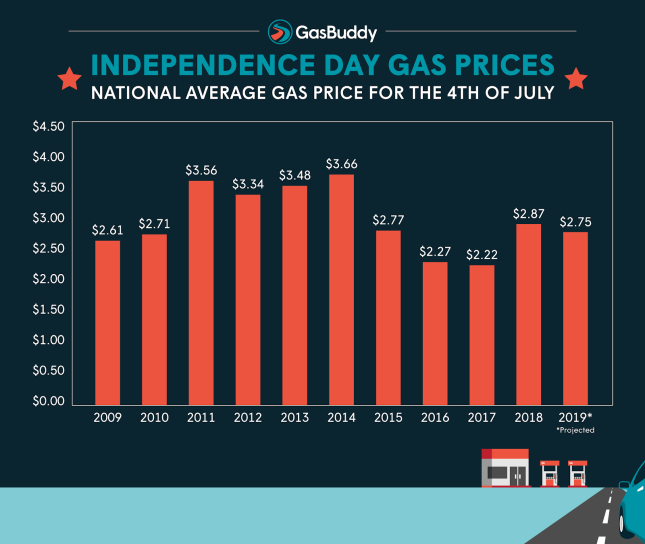 As of Monday morning, the national average gasoline price is about $2.72 a gallon, seven cents higher than a week ago but still down by nearly a dime from the month-ago price of $2.82. One year ago, a gallon of gas cost $2.85.

California drivers were paying $3.81 on average for a gallon for gas Monday morning (down three cents week over week), with drivers in Hawaii ($3.78, up nine cents), Nevada ($3.35, down six cents), Washington ($3.27, down three cents) and Alaska ($3.26, down seven cents) rounding out the five states with the highest prices. Drivers in Oregon and Utah also paid more than $3 a gallon.

GasBuddy notes the three greatest sources of anxiety for U.S. motorists planning to hit the highways this holiday weekend: “Overpaying for gasoline is the #1 road trip fear, … the car breaking down in the middle of the trip … [and] needing to use the restroom but unsure of which gas stations have clean facilities was third.”