In a study about how activity on the social media network run by Twitter Inc. (NASDAQ: TWTR) can predict health outcomes, researchers found tweets on the network can predict heart disease patterns. Perhaps the research will replace more expensive and traditional approaches used by organizations like the CDC and work by major universities. If so, the cost of predicting health outcomes could shrink. However, the report is a bit of voodoo science, and thus has little value.

According to authors writing in the Journal Psychological Science:

Previous studies have identified many factors that contribute to the risk of heart disease, including behavioral factors like smoking and psychological factors like stress. Researchers from the University of Pennsylvania demonstrated that Twitter can capture more information about heart disease risk than many traditional factors combined, as it also characterizes the psychological atmosphere of a community.

ALSO READ: Nurses Are the Most Trusted People in America

The researchers found that negative emotional language and topics, such as words like “hate” or expletives, remained strongly correlated with heart disease mortality, even after variables like income and education were taken into account. Positive emotional language showed the opposite correlation, suggesting that optimism and positive experiences, words like “wonderful” or “friends,” may be protective against heart disease.

It is a shock the analysis did not include information such as healthy diets, obesity and access to health care. Too bad. That might have made some of the conclusions legitimate. Also ignored is the age and income composition of the geographic areas that were covered. However, the researchers do not consider those the primary reasons the data have drawbacks:

Limitations of the method’s predictive power include the social factors that influence what kinds of messages people choose to share on Twitter.

Nevertheless, the authors believe that Twitter could be a powerful tool, despite the aforementioned limitations of the data collected and analyzed by experts. Commenting about the simple power of the social network in place of traditional research:

“Twitter seems to capture a lot of the same information that you get from health and demographic indicators,” co-author Gregory Park said, “but it also adds something extra. So predictions from Twitter can actually be more accurate than using a set of traditional variables.”

Who need scientists and health care officials? Apparently, no one. 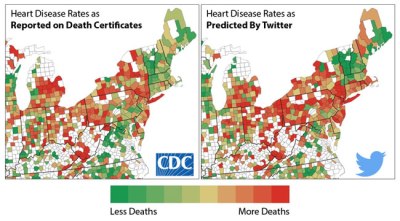