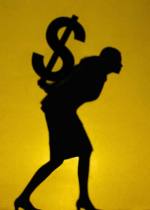 The cost of the bailouts of Freddie Mac (NYSE: FRE) and Fannie Mae (FNM) could rise as high as $1 trillion, according to Bloomberg. Even the most modest projections call for the price tag to be close to $200 billion.

The government owns 80% of the two financial firms and has extended them nearly $150 billion in lines of credit. The reason for the tremendous sum is that  the two control the US mortgage market, owning or backing more than half of the nation’s home loans. Congress and economists have come up with no other facility to take and hold those loans because they lost so much of their value during the collapse of the housing market.

The analysis is troubling, particularly because the high-end of the estimate is not accounted for in the federal budget and could add to the deficit.The figure has to be balanced against the $75 billion Obama homeowner aid package, which has largely been a failure. It operates on the theory that if people owning houses can secure lower monthly payment that they will not default on their obligations and leave their homes driving down home prices even further.  Homes in some regions have lost more than half of their value.

The $75 billion program has modified only a few hundred thousand mortgages permanently with more than one million home loans in the “trial”” phase. The trouble with the system is that many of those who get lower monthly packages end up defaulting anyway, either because they lose their jobs or their hope that the homes they live in will ever have positive equity value.

The interlocking problems of high unemployment and housing prices are seen more clearly in the Freddie and Fannie problems than anywhere else. Moreever, the  amount it will cost to bail them out begs the question of what else the federal government can do to support homeowners.

The most effective but least attractive of the potential solutions — at least to banks —  is to modify the principle amounts of millions of mortgages. That would not only lower monthly payments; it would give homeowners real hope that their homes will be worth more than their home loans–a significant reason to keep paying their mortgages. The arguments against this is that banks will have to take write-downs on modified loans and handle complex paperwork to make the new system work.

That leaves the federal government two choices. The first is to cover hundreds of billions of dollars in Freddie and Fannie financial bleeding. The second is to make banks whole on mortgage principle revaluations.  No one can predict which option will cost more.

The Is The Worst State For Renters

This Is the Hardest City to Rent an Apartment