The Eight States Running Out Of Homebuyers 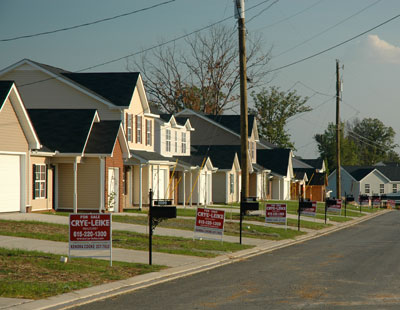 The single biggest problem in the U.S. real estate market is simple: There are very few homebuyers.

That seems obvious, but the “buyers’ strike” has caused house prices to drop, along with an epidemic of foreclosures. What’s worse, the long depression in real estate is probably not over. S&P has forecast that home prices will drop by 7% to 10% this year. The S&P Case-Shiller Index has dropped for most of the 20 largest real estate markets over the last several months. RealtyTrac recently reported that more than one million homes were foreclosed upon in 2010.

Many economists argue that the housing market may take four or five years to recover. Even if that’s proven to be true, the all-time highs of 2006 may never be reached again.

The devastation in some regions will never be repaired. Parts of Oregon, Georgia, and Arizona have become progressively more deserted.  Since jobless rates may never recover, there is little reason to hope that the populations in these areas will ever rebound.  Some homes will be torn down in these pockets of high foreclosures in the hopes that reducing  supplies will boost prices.  Whether that idea will work in hard-hit areas such as Flint, Mich. and Yuma, Ariz. remains to be seen.

24/7 Wall St. looked at a number of the standard measures to find the housing markets facing the biggest problems attracting buyers. After a detailed examination, six metrics were chosen: (1) vacancy rates for 2010; (2) foreclosure rates for 2010; (3) November 2010 unemployment rates; (4) change in building permits from 2006 to 2010;  (5) change in population from 2005 to 2010; and (6) price reduction by major cities for 2010. Taken together they create a strong statistical base to describe markets which buyers have largely abandoned.

Several states nearly made it onto the list such as Colorado and South Carolina, but did not get poor enough marks across all of our measurements.  Each was among the ten worst for declines in building permits. Colorado had one of the worst foreclosure rates, and South Carolina one of the worst vacancy rates. However, the populations in both states have rebounded enough to make a strong case that their housing markets may recover moderately over time.

The review of the data raises several public policy issues. The most important of these is whether the federal focus on reviving the housing market should be concentrated in the hardest hit regions. The counter to that point of view is that some cities such as Flint or states like Nevada are in such bad shape that they are beyond assistance. Unemployment rates are too high in these areas and perhaps the number of homes on the market is too large.

One thing is certain. The housing recovery will be wildly uneven. A city like New York which has a dense population and large numbers of middle class and upper class buyers who will wait until they believe prices hit bottom will have a rapid recovery soon. Building permits granted in New York City over the last four years have been very low. The supply of apartments is also low. Those forces taken together with an even modest economic recovery will help push real estate prices higher in New York and regions with similar characteristics.

The real estate crisis has gone on for four years. In the states 24/7 Wall St. has chosen here, the crisis will go on much longer.