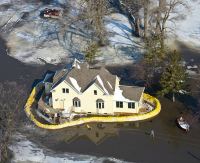 Source: Wikimedia, public domain
As home prices continue to slide, more and more homeowners find themselves owing more on their homes than those houses are worth. The slowing level of foreclosure activity last year only exacerbated the problem, leaving more homes in trouble on the market. Last week, Corelogic reported that the number of underwater mortgages as a percentage of all mortgaged homes rose in the fourth quarter of 2011 to its highest level since 2009, the first year the property analytics provider began reporting the data.

According to Corelogic’s Negative Equity report, the mortgages on more than 11.1 million homes, or 22.8% of the nation’s 48.7 million mortgaged homes, are underwater. Based on Corelogic’s report, 24/7 Wall St. identified the 10 states with the highest percentage of underwater mortgages.

Some of the states with a high percentage of underwater mortgage had economic problems long before the recent recession. States like Michigan and Rhode Island have experienced long-term industrial declines for some time. In these areas, drops in home values were only accelerated by the recession.

For most of the states on the list, however, a decline in home values is the main reason homeowners suddenly found themselves owing more on the their houses than they are worth. These states, which include Nevada and Arizona, experienced some of the biggest housing booms in the country. Many homeowners took out mortgages when home values were at their highest. The plunge in housing values was just as big, though. As a result, nearly half of all mortgages in these states are underwater.

Being underwater does not ensure financial disaster for homeowners — so long as they are otherwise financially secure. In states like Virginia, for example, high median income and low unemployment has contributed to a relatively low rate of homes that are 90 days or more late on their payments, or are in foreclosure. This is despite the fact that 23% of the state’s mortgages are underwater, the 10th-highest rate in the country.

Most of the states on the list, however, are not as fortunate as Virginia. Seven of the 10 worst-off states have unemployment rates above the national average. Six of them have median household incomes below the national average. According to Fiserv’s home price projections, nine of the 10 states on this list will continue to see home values fall substantially through the third quarter of this year.

24/7 Wall St. relied on Corelogic’s Q4 2011 Negative Equity report to determine the states with the highest percentage of mortgages with negative equity. Because of sample size, seven states were excluded from their results. These states, which include Wyoming and Vermont, account for fewer than 5% of the total U.S. population. In our own analysis, we examined a variety of metrics. We included December unemployment rates provided by the Bureau of Labor Statistics and median income, median home value and poverty rate from the U.S. Census Bureau. Declines in home value from peak to fourth quarter of 2011 is from FHFA. Fourth-quarter 2011 delinquency (90+ days) and foreclosure rates are from Corelogic. Forecast changes in home value by state are from Fiserv.