The States With the Most Homes in Foreclosure 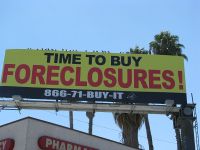 Source: wikimedia commons
Five major U.S. banks accused of foreclosure abuses have agreed to a $26 billion settlement with the government, the largest payout from banks arising from the financial crisis. The amount, which will include aid from banks in the form of loan forgiveness and refinancing, is intended to help homeowners avoid mortgage default and foreclosure. Most economists believe this is a step in the right direction, albeit only a small one.

Read the Eleven States With the Most Homes in Foreclosure

Homeowners in at least 49 states represented in the agreement will benefit, though some states have more homes in trouble than others. California, one the hardest-hit states in the foreclosure crisis, will reportedly receive mortgage relief of up to $18 billion. Based on Corelogic’s national foreclosure report released yesterday, 24/7 Wall St. identified the states with the highest foreclosure rates.

While some of the states with high foreclosure rates have had substantial improvements in their economies, others continue to be hit hard. In Nevada and Florida, two states with the highest foreclosure rates, homes lost roughly half of their value over the past five years — and prices are still falling. Foreclosures that began several years ago and that are still active cannot be the only reason nearly 12% of Florida’s homes with mortgages were in foreclosure last year. Home prices in the state fell nearly 50% over the past five years, unemployment remains extremely high, and 17.4% of people with mortgages in the state were 90 days or more late on their mortgage payments.

24/7 Wall St. reviewed housing data provided by Corelogic to rank the states that had the highest percentage of homes with mortgages that were in foreclosure in 2011. Corelogic’s report also provided the percentage of homeowners that were delinquent on their mortgages for 90 days or more last year. In order to highlight the conditions of these state economies and housing markets, we included unemployment rates from the Bureau of Labor Statistics and home price changes from Fiserv-Case Shiller.

These are the 11 states with the highest foreclosure rates.