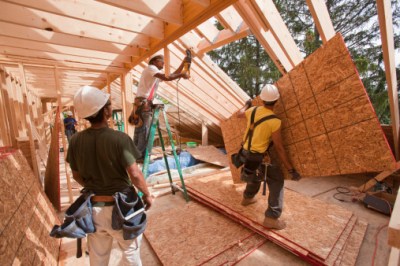 Source: Thinkstock
Some of the Wall Street firms that championed the homebuilding stocks are starting to back away, citing higher interest rates as the main factor. The fact is, last week the 30-year mortgage rate was at an incredibly low 4.38%. By historical standards, that is still far below a figure that would impede interested buyers.

The analysts at Deutsche Bank point out in a new research report, that while seasonal numbers have dropped, which is common in the winter, the future should be bright for the top names. The bottom line is supply. For years following the housing collapse, next to nothing was built. This has led to a true shortage in fast growth areas of the country like Texas. With an improving economy, the top homebuilders should enjoy a very solid year.

Here are the top homebuilding stocks to buy from Deutsche Bank for 2014.

D.R. Horton Inc. (NYSE: DHI) leads off the list at Deutsche Bank. D.R. Horton has had the best growth in the group, expanding 12.47% annually for the past three years despite the recession’s lingering effects on the housing market. As a side note, D.R. Horton did acquire Breland Home at the end of fiscal 2012, which will help with further growth going forward. Investors receive a 2.8% dividend. The Deutsche Bank price target is $27. The Thomson/First Call target is lower at $23, and the stock closed Tuesday at $22.32.

LGI Homes Inc. (NASDAQ: LGHI) went public back in November, and the stock has done extremely well. Up more than 60% from the IPO price, LGI Homes is confident about its approach to finding homebuyers and encouraging them to purchase a new home. Although the company may be much smaller than its competitors, it is making a big impression with its direct marketing plan. The Deutsche Bank price target is $18, while the consensus stands at $18.50. The stock closed Tuesday at $17.79.

MDC Holdings Inc. (NYSE: MDC) is down 27% in the past six months, after shooting 150% higher from October 2011 through May 2013. Founded in 1972, MDC builds and sells first-time and move-up single-family homes under the Richmond American Homes brand name in Arizona, California, Colorado, Florida, Maryland, Nevada, New Jersey, Pennsylvania, Utah and Virginia. Investors are paid a very solid 3.1% dividend. The Deutsche Bank price target is $43, and the consensus is at $34. The stock closed Tuesday at $32.24.

Meritage Home Corp. (NYSE: MTH) reported a 44% increase in revenue from home closings last quarter, with earnings per share (EPS) up 421% for the third quarter, and an astounding 583% in 2013. These metrics are largely being driven by a 22% increase in the average home sales price, as the company continues to grow its sales mix in the upscale market. Deutsche Bank has a $52 price target, and the consensus figure is posted at $51.50. Meritage closed Tuesday at $47.99.

Ryland Group Inc. (NYSE: RYL) is a homebuilder and a mortgage-finance company, which consists of six operating business segments, namely four geographically determined homebuilding regions, financial services and corporate. Pent up demand from young adults is one of the key reasons to own the stock. Their price points are designed to attract the first and second time buyer. The stock pays a small 0.3% dividend. Deutsche Bank has a $49 target, and the consensus is set at $48. Ryland closed Tuesday at $43.41.

Toll Brothers Inc. (NYSE: TOL) targets the high-end customer and business has been very strong. The company designs, builds, markets and arranges finance for detached and attached homes in luxury residential communities in the Unites States. It is also involved in building and selling homes in urban infill markets. In addition, the company owns, develops and operates golf courses and country clubs that are associated with various planned communities. Deutsche Bank has a $39 price target, and the consensus is at $38. Toll Brothers closed Tuesday at $37.

For the past five years, the housing market has been slowly recovering after hitting rock bottom in late 2008 and early 2009. The housing market crash not only caused home values to fall dramatically, but also triggered the worst economic recession in more than three decades. With continued low rates, and a demand scenario that has improved, investors should consider adding one of these top names to their portfolios for 2014.