Are Nonbanks Taking Back Control of the Mortgage Market?

When it comes to getting a mortgage, there have always been many options. Traditional banks have still dominated this scale, but it turns out that the so-called nonbanks are gaining traction in the fight for your mortgage. Some of this may have to do with less regulation after the financial crisis, some may also have to do with fees.

A fresh report from S&P Global Market Intelligence showed that, in 2015, nonbanks accounted for 48% of all new mortgages in the United States. This is up from 45% in 2014. S&P sourced the newly released data from the Home Mortgage Disclosure Act, or HMDA.

As a reminder, the waves of bankruptcies, delinquencies and foreclosures wiped out many of the nonbank subprime lenders. Then there was also the big bank bailout that came into play as well.

One issue driving the nonbank dominance here is that the nation’s large banks are focusing their efforts on the jumbo or non-conforming loans. Details are shown in a table below, but here are some of the data by company shown in an SNL report that was sourced:

The table from SNL below shows the market share rank, including the nonbank lenders. Again, Wells Fargo was number one and JPMorgan Chase was number two. 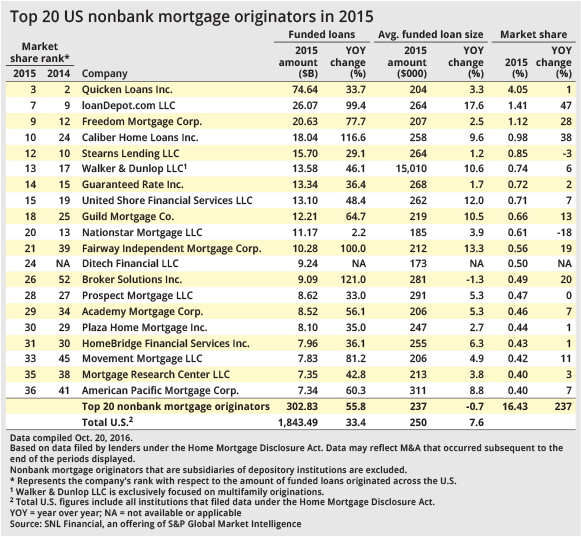