Homeownership in the United States is complicated. On the one hand, it has been inextricably linked with the American Dream. On the other hand, it has offered U.S. taxpayer a substantial deduction on their annual tax payments. The influence of the other hand fell off a cliff in the 2018 tax year.

The Internal Revenue Service (IRS) recently reported the data, which compares tax returns received in the first 30 weeks of both tax years. The IRS data represents approximately 95% of all individual filers, 87% of total adjusted gross income and 82% of total tax liability.

Do the numbers suggest that the mortgage interest deduction should or will be eliminated? As Felix Salmon at Axios pointed out in his weekly newsletter, “Tax deductions are much easier to create than they are to abolish; they’re also hugely expensive.” Salmon included the following chart in his story, showing the year-over-year change in tax returns claiming various types of deductions. 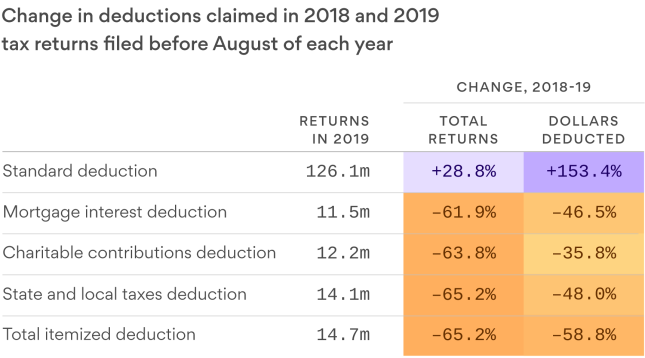 If only 8% of taxpayers still claim the mortgage interest deduction, why keep it? And if there’s no tax advantage to having a mortgage, what does that mean for the housing market? At the 21st century peak in the second quarter of 2004, 69.4% of Americans owned a home. At the end of the second quarter of 2019, that number had declined to 64.2%. Homeownership is shrinking, not growing — here are the cities where most people actually own their homes.

Low interest rates get a lot more news coverage than do the tax advantages of homeownership, and the interest rate on a 30-year fixed-rate mortgage as of Thursday night was right around 3.57%, according to Mortgage News Daily, actually up from a 52-week low of 3.46% on Wednesday. Even so, mortgage loan rates have dropped further since late last year (a high of 5.05%) than they did in 2008/2009. The low rates attract buyers and homeowners looking to refinance their mortgages. Especially the latter: refinancings accounted for more than 60% of new mortgage loans last week, according to the Mortgage Bankers Association.

Home price increases have slowed, mortgage interest rates are low and more Americans have jobs now than at any time in nearly 50 years. The homeownership should be booming, but it’s not. When more potential buyers recognize that there is no longer a tax advantage to homeownership, the American Dream may receive a wake-up call.

As long as the owner or owners have properly planned and budgeted their income, they should not face a severe financial burden from the debt. Yet not all Americans plan their finances correctly, and sometimes unforeseen circumstances get in the way. Just as home prices vary from state to state, so does the average mortgage debt — these are the states with the most mortgage debt.

24/7 Wall St.
The 50 Counties Where People Live the Longest
Get Our Free Investment Newsletter