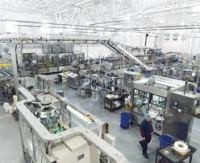 The March report on durable goods from the US Census Bureau is out and for the second of the past three months new orders are down. The March drop totals -4.2%, with transportation equipment down the most, -12.5%, largely due to a $7.7 billion drop in orders for nondefense aircraft and parts.

On the whole, the report indicates an economy that can’t decide whether or not it’s growing or stagnating. With new orders down and inventories up, the good news we’ve been seeing from the manufacturing sector could soon turn sour.