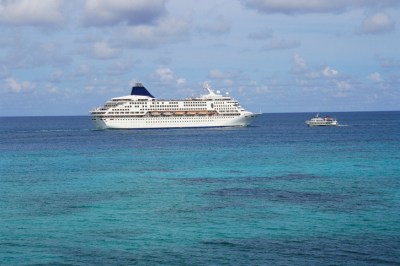 Source: Thinkstock
Another black eye for the cruise industry, which over the past year has been dogged by a ship that ran aground and killed passengers, a number of cases of food poisoning and a ship that lost engine power and drifted without ready aid. Reuters said of the Royal Caribbean Cruises Ltd. (NYSE: RCL) cruise ship fire:

Fire aboard a Royal Caribbean cruise ship forced it to dock at Freeport, Bahamas, on Monday, with all passengers and crew safe but the rest of the trip canceled, the cruise company reported.

Grandeur of the Seas, operated by Royal Caribbean Cruises Ltd, was on a seven-night trip that left Baltimore on Friday. The 916-foot-long (280-metre) ship was en route to CocoCay, Bahamas, when a fire occurred in its mooring area early on Monday, the company said in a statement.

The fire was extinguished in about two hours and the 17-year-old vessel was redirected to Freeport, the company said. As a result of the damage, the rest of the trip was canceled and passengers were refunded their fares and offered a free cruise in the future.