Is Boardwalk Just the Start of Nat-Gas MLP Woes?

Source: thinkstock
Boardwalk Pipeline Partners L.P. (NYSE: BWP) was a total disaster on Monday, and it has 24/7 Wall St. wondering just how many other Master Limited Partnerships and trust structures in the oil and gas sector could be at risk. The good news is that Wall Street does not seem that concerned of a spill over into peers and competitors, at least not yet.

The partnership said that this reduction in the distribution “will free up internally generated cash to help fund growth and reduce leverage in order to strengthen the balance sheet during the difficult market conditions impacting the Partnership.”

What the MLP did not say is that this effort will drive away future MLP investors. The unit is targeting 4:1 Debt-to-EBITDA ratio, and a lower distribution will allow it to reduce leverage down to that level. About the only good news is that Boardwalk does not anticipate the need to issue and sell additional limited partner units in 2014.

Boardwalk said that it was targeting distributable cash flow for all of 2014 of about $400 million, a drop of $158.6 million from 2013. The blame was due to unfavorable market fundamentals negatively impacting existing natural gas transportation and storage revenues.

The partnership sees a $40 annualized drop in revenues from 2014 firm transportation contract renewals and expirations. The continued narrowing of the forward natural gas pricing curve is also expected to reduce its parking and lending and storage opportunities in 2014.

Boardwalk said, “Assuming the current distribution rate for each quarter for the remainder of the year, the distribution coverage ratio for 2014 is anticipated to be approximately four times coverage. Distributions will continue to be determined at the discretion of the Board of Directors of the Partnership’s general partner on a quarterly basis.”

Elsewhere, the opinion of Boardwalk just went south. Moody’s gave it a negative rating outlook. S&P cut Boardwalk’s rating to BBB- From BBB, with a Negative outlook as well. Monday’s reaction was bad enough that the units fell a whopping 46% down to $13.01, and the new adjusted 52-week range is $12.79 to $33.00. Credit Suisse even hit the eject button, cutting the official rating down to Underperform from Neutral and putting the adjusted target price down at $20 per unit.

What is surprising to 24/7 Wall St. is that the reaction was not worse elsewhere in the MLP sector. Most of the high-yield (distributions rather than dividends) MLPs held up well. One exception is El Paso Pipeline Partners, L.P. (NYSE: EPB) – in natural gas pipelines and terminaling – that was hit in sympathy with Boardwalk. Its units were down 2.6% to $30.74, and El Paso’s adjusted 52-week range is now $30.68 to $44.99 as they hit a new 52-week low on Monday. Its volume of almost 1.4 million units compared to an average volume of 861,000 units. El Paso’s market cap is $6.7 billion even after the drop and even at 52-week lows. Its distribution yield-equivalent screens out at 8.2%.

The ETFs and funds held up on Monday:

It still seems more than interesting that the investment community did not pound the rest of the sector in sympathy with Boardwalk. This Boardwalk MLP still has a $3.1 billion market cap, even after getting cut almost in half. Usually investors try to tie in peers when one implosion is seen versus others. It seems as though they are trusting that negative natural gas exposure here is not going to spill over into the rest of the sector, and maybe not even spill over into the price of units in its more direct peers.

One outside issue that has had at least some investors being less bullish on MLPs now is the coverage of income and cash flows that can be distributed. Another issue is how well MLPs will be treated by investors if Treasury yields rise very much. A third issue which could arise down the road is if MLP structures get any more bad news elsewhere, suddenly choking off the secondary markets for them to raise additional funds.

Fortunately, at least so far, this situation in Boardwalk is being treated as at somewhat of an isolated incident. It is also even possible that Wall Street investors are interpreting that the pain of Boardwalk is considered a gain for others.

Boardwalk’s operating map is below: 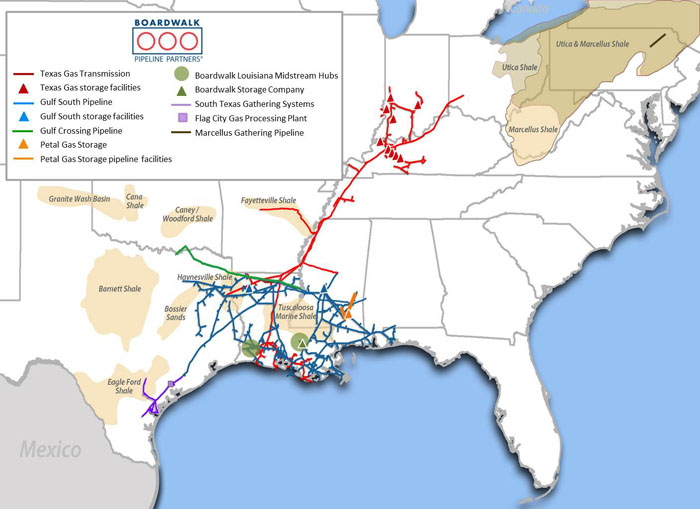