Rhode Island Residents Most Dissatisfied With Their Roads

Among the smallest states geographically, a large number of Rhode Island residents are dissatisfied with their roads. Perhaps this is because they have so few of them. However, the second state on the list of states where residents are dissatisfied with their roads, put together by Gallup, is Michigan. That tears the state size by geography theory apart.

Gallup has come up with a correlation which makes sense, intuitively:

States vary widely in how much they spend on road construction and maintenance, and how they raise that revenue. There is a modest positive correlation between state spending on roads per capita and residents’ satisfaction with roads — states that spend more tend to have higher satisfaction.

The theory does not have a great deal of foundation based on specifics, however:

The difference between 61% and 60% is hardly conclusive.

One thing which is clear is that people who live in the Plains States rank at the top of “road satisfaction”:

Rhode Island (31%) and Michigan (35%) residents are less likely to be satisfied with the roads and highways where they live than are residents in any other state. North Dakota has the highest satisfaction at 81%, followed closely by Wyoming, Utah and Kansas.

With very few residents per square mile, these large Plains States, based on size, may have very few roads to carry very few drivers.

Results for this Gallup poll are based on telephone interviews conducted March 30-Dec. 22, 2015, with random samples of approximately 500 adults, aged 18 and older, living in each of the 50 U.S. states. Data are weighted to account for unequal selection probability, nonresponse and double coverage of landline and cellphone users in the two sampling frames. Data are also weighted to state estimates of gender, age, race, Hispanic ethnicity, education and phone status (cellphone only, landline only, both, and cellphone mostly). 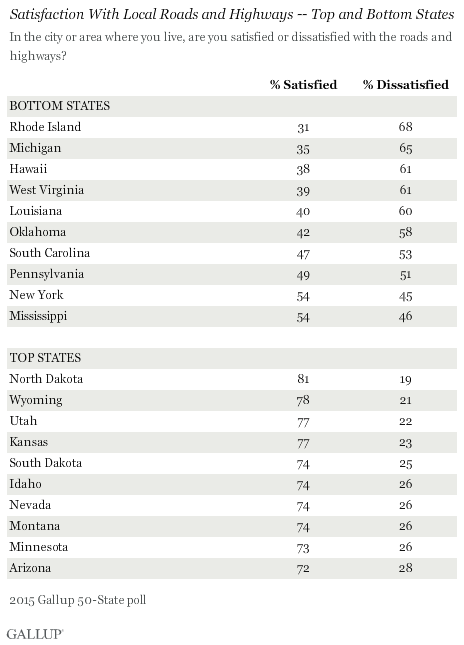