It is no secret that things could be much better at Fannie Mae (NYSE: FNM) and Freddie Mac (NYSE: FRE).  But the last week or so has re-highlighted just how dire the situation is for these government sponsored entities and perhaps more importantly for the common shareholders. Both Freddie Mac and Fannie Mae were forced into federal conservatorship last year by Uncle Sam.

We have taken an in-depth look here at the situation and the past to get a feel for the future of these companies (GSE’s).  If you parse through the data and watch what has been happening in Washington D.C. of late, there is the clear reminder that these emperors have no clothes on.  In the world of Star Trek, these companies stockholders may be facing a Kobayashi Maru scenario.

It was just last Monday when the financial sector specialty brokerage and investment banking for of Keefe Bruyette & Woods gave this stock the downgrade from hell.  It was not just that the downgrade went to an “Underperform” rating.  It was that KBW said these companies will likely have a ZERO VALUE in both the common stock and in the preferred shares when the inevitable restructuring comes.

While Freddie Mac only had one up-day this week, it did close much better than the $1.24 closing low and the $1.06 intra-day low.  But the close the Friday before was at $1.72, so Friday’s $1.36 close tallied up a 21% loss for the  week. Fannie had a rough week too, but not as many down days.  The $1.46 close the Friday before translated to a 19% drop to Friday’s $1.18 closing price.  And that is also above the $1.12 low close for the week and above the $0.95 intra-day low this last week.  If things roll back over and continue to get worse, one or both of these could even come under delisting warnings from the NYSE or at least fall into the catetgory of companies which should be given warnings and are just given a pass for listing requirements.

Freddie Mac’s acting Chief Financial Officer, David Kellermann, committed suicide earlier this year.  On April 22 that news broke shares had closed the day before at $0.86 and closed at $0.79 the day after.  As that was April, there is a significant price difference in market index levels and  even between the junky financials then and now.

This last week there comments out of Washington from the Fed’s Lacker noting that these two have ‘outlived their usefulness.”  The Obama administration has noted in recent weeks that any formal change or formal decision in Fannie and Freddie is still a long ways out. Although there were FHA developments this week to keeping the local level flowing, how that affects Fannie or Freddie will be known in the coming weeks.  Due to other woes of more pressing matters in the financial sector, it seems that Fannie and Freddie have been given a pass to stay out of the financial destruction game.  But they will have to suit up in the gladiator costume eventually.

To add insult to injury, Freddie Mac disclosed in an SEC filing late in the week that its mortgage delinquencies continued to rise in September. Freddie disclosed September delinquencies on single-family residences at 3.33%.  That is up from 3.13% in August and up much more sharply from the year ago reading of 1.2%. It also showed that the portfolio rose by $4.8 billion after three consecutive monthly declines to a new level of $784.17 billion. The change was due to mortgage-backed securities held. It also disclosed that the refinance-loan purchase volume fell down to $21.4 billion from $35.6 a month ago.

As all the housing activity seems to be in the $250,000 and under housing market, it seems that all the new homes are ‘conforming’ loans that would be able to go through Fannie Mae and Freddie Mac.  Unfortunately, this may come to an abrupt end if that $8,000 first-time home buyer tax credit expires at the end of November.

Alan Greenspan came out of the crypt even in 2008 and called for a nationalization of both Fannie and Freddie.  He referred to the two GSE’s as accident waiting to happen.  Then a break-up should occur into as many as five to ten different companies that would be sold back to the market.

But back to the situation of today.  Fannie Mae sold $3.5 billion in 5-Year benchmark notes this last week, at a yield of 2.737% and a spread of a mere 33 basis points over comparable U.S. Treasuries. The notion that these entities can sell bonds with spreads that tight is almost impressive despite our own extreme caution.

If you can believe it, there are stock options in both Fannie Mae and Freddie Mac.  They are extremely expensive and are actually not that active in trading considering the huge open interest.  With both stocks just above $1.00, it seems as though these are already just long-term warrants with way out of the money strike prices. 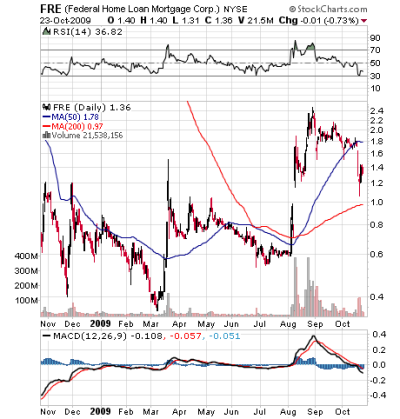 Despite all the cautious nature here, it does have to be at least addressed just how much these have recovered from the lows even considering the sell-off this last week and even before that. And as for the charts, we might take the argument that charts on $1.00 stocks are not as relevant.  But pure technicians that watch no news and look at no fundamentals at all would tell you that the charts are currently at critical levels in both Fannie and Freddie.  Even the downtrend channels were violated, and if much weakness comes into play in the next week then the technicians will be saying weakness begets more weakness. (chart from StockCharts.com)

The ultimate fate of these GSEs is not really dependent upon the economy or the housing market.  Is that a paradox?  The fate of Fannie and Freddie as far as the common and preferred shares go depends almost entirely upon the political situation in Washington and the ability to or not to include these financial black holes on the balance sheet of the federal government.  Ultimately, these entities will survive in some form or fashion, even if they are under a new entity.  But we have already called the notion that the financial pain and sacrifice will go far up the chain in the line of creditors.  That call still stands.