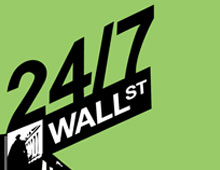 L-1 Identity Solutions, Inc. (NYSE: ID) is said to be close to a buyout, and some are calling for a $1 billion valuation for the identity protection and security ID company.  The question is whether the $432 million in long-term debt is a part of that $1 billion or not.  At $8.99, the market cap is $837 million and the 52-week trading range is $5.67 to $10.42.  Trading volume was nearly three-times normal volume with over 3.1 million shares traded.  There was also an explosion in call option volume in September and October expiration dates around the $10.00 and $11.00 strike prices.

Netflix, Inc. (NASDAQ: NFLX) is a rocket ship over and over. It sells off when the market sells off, but then it slingshots higher when the market rallies.  Investors Business Daily gave it the pole position yet again, in the IBD 100 followed by ARUN as #2, BIDU as #3, and PCLN as #4.  The love and interest behind Netflix has been rather unique and amazing and at some point the valuations have to come into play.  When that is, who knows, but the market cap is now $7.25 billion and it trades at nearly 50-times 2010 earnings estimates now.

Noble Corp. (NYSE: NE) was given a Barron’s feature this weekend titled Offshore Drilling, the Right Way… “Hurt by the fallout from the Gulf disaster, deepwater driller Noble may hit bottom. Get ready for a gusher… If there’s a will to get at that oil, there’s a way: deepwater drilling companies like Noble…”  Oil stocks almost always revolve around the real oil price, but this could offer it a decent pop on Tuesday as long as overseas markets don’t fall apart on Monday and as we come back on Tuesday in the U.S.  At $32.70, its 52-week trading range is $26.23 to $45.60.

Petroleo Brasileiro (NYSE: PBR), or Petrobras, is now clear for a huge stock offering that to the best of our knowledge will mark one for the record books.  Our own Paul Ausick gave a full rundown for this late on Friday. Friday’s options trading showed that PUTS traded more than 3-times normal volume with about 32,000 contracts and CALLS traded nearly 3-times normal volume at about 33,000 contracts.

Raytheon Co. (NYSE: RTN) was featured positively in Barron’s over the weekend as Raytheon’s Not-So-Secret Weapon: “With ties to thousands of military, espionage and homeland-defense projects, the company isn’t likely to be slammed by single massive defense cuts.”  Contrarians have been making the same case, and shares at $45.67 are still only about $3.00 off of fresh lows as the 52-week range is $42.65 to $60.10.