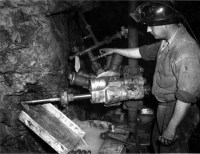 The value of bullion, as measured by the Comex price and the price of the SPDR Gold Share ETF, does not always translate into a corresponding value for the miners. The miners face all kinds of variables that are absent from a pile of gold bars in a bank vault.

The second issue miners face is finding new sources of the shiny metal. The big miners, like Goldcorp and Kinross, are sitting on plenty of cash and dwindling reserves. That’s what makes companies like Andean so much in demand. Goldcorp’s offer reflects a value of 1.5 times Andeans proven and probable reserves. Newcrest bought Lihir for a premium of just over 20% of the value of Lihir’s reserves, and Kinross paid about a 38% premium to reserves held by Redback.

Why is Andean worth so much more to Goldcorp? First, there is at least one estimate that Andean holds “potential” reserves amounting to another 4.2 million ounces. Goldcorp appears willing to bet that the estimate is mostly true. If it is, the premium Goldcorp is paying falls to 35% about current Andean reserves. That’s still a bit rich, but not nearly as bad as it could be. Remember, too, that extracting South American gold is cheaper than extracting gold anywhere else. Now, Goldcorp’s bid doesn’t look so extravagant.

As gold reserves continue to dwindle and get harder and more expensive to find and mine, prices will rise both for mined gold and for scrap gold. If Andean actually has all that gold under its feet, then Goldcorp may have made a good deal here.

One last point: although Eldorado has dropped out, the bidding for Andean could continue with new players. Andean stockholders don’t vote on the Goldcorp bid until December.