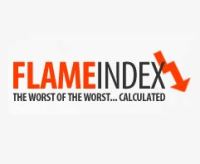 Shareholders of Frontier Oil are displeased about its merger with Holly Corp. It would be more accurate to say that Holly is making an acquisition for $2.9 billion. Shareholder class actions suits have already started. Forest Laboratories was also hit by a wave of negative news as it said it would buy Clinical Data for $1.2 billion.

Note: The Flame Index scans thousands of news sites 24 hours per day and ranks companies getting the most negative press right now. The Flame Index Media Analysis Algorithm crunches the data for an up-to-the-minute ranking of the hardest-hit companies.
The Flame Index started as a research tool in 2008 at the NY Innovation Design Lab (nyidlab). It was used as a general metric to evaluate companies and their risk in the media. Publicly traded Fortune 500 companies are used as a measure to calculate an overall market of negative news and the companies are ranked within that market.