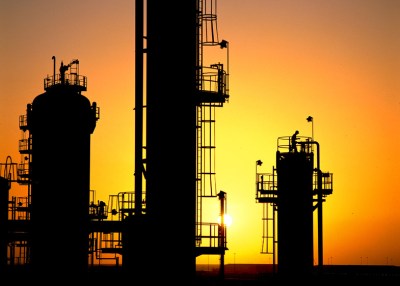 As crude oil prices continue their steady trend above $100/barrel, US refiners are preparing for the worst. Actually, the worst is already here, in the form of spiking prices. Worse than anything, refiners dislike volatility, and with crude prices rising $2/barrel or more every week, refiners’ worst nightmares are coming to life.

Since the beginning of the year, though, refiner’s have been doing very well. The crack spread, that is, the difference between what a refiner pays for crude and what that refiner is able to sell the refined products for, doubled between January 1st and March 1st, to more than $26/barrel. Here’s a chart for the past year from Bloomberg: 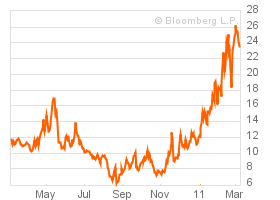 US demand for heating oil drove a lot of the gain. The rest came from more miles driven and, to some extent, short covering. Those traders who couldn’t believe that refiners could make a profit as crude prices rose had to keep doubling down. But payback time could be here.

Last week Valero indicated EPS for the first quarter would be in the range of $0.15-$0.30, far below estimates from analysts of $0.47. Valero said it expected an after tax loss of $0.61/share ($348 million) on forward sales. In other words, the company lost its hedging bets, and decided to close out its positions and take the loss in the first quarter.

Valero put up a new 52-week high in February, just as the unrest in Egypt was boiling up. Since then it has lost about 10%, although it has regained most of that loss. The stock owns a trailing P/E ratio of more than 50, but a forward P/E of less than 9. The company’s enterprise value is $20.31 billion.

Holly posted a new 52-week high at about the same time as Valero, and like Valero has seen a similar fluctuation since then. Holly has announced its intention to acquire Frontier in an all-stock deal that will give the combined company an estimated enterprise value of $7 billion. Holly’s trailing P/E ratio is nearly 30, and its forward P/E is just over 11. Frontier’s trailing P/E is about 77, and its forward P/E is 12.51.

Tesoro’s share performance tracks nearly identically with Valero’s and Holly’s. Tesoro’s enterprise value is $4.85 billion, but the company posted a loss last year, so there’s no trailing P/E. Forward P/E is near 11.

The majors — Exxon, Chevron, and Conoco — are looking to sell refining assets in an effort to cut debt and to put capital to work in exploration and production, where the real money is. Holly is getting Frontier at a discount, and Marathon has announced that it will spin-off its refining and marketing operations into a separate publicly traded company.

Refiners and refineries are being valued at their lowest level in more than four years. At the height of the “there’s-not-enough-US-refining-capacity” craze in 2006, refining assets were valued at 80% more than the same assets today.

The soaring crack spreads won’t continue, and as gasoline prices rise, US drivers will stay home more. The low valuations could soon be matched by lower refining margins and lower demand.