Nuclear power as a carbon-free movement and as a path to energy independence in America is not likely to get sidelined in the immediate aftermath of the Sendai, Japan earthquake.  The 8.9-magnitude quake and tsunami that followed killed tens of thousands and the reports of the death are enough to move anyone emotionally.  Now the potential nuclear reactor(s) meltdown that is taking place in Japan has put a virtual radioactive cloud over nuclear power’s role in powering the world.

All you have to do is look at PowerShares Global Nuclear Energy (NYSE: PKN) with its 11.5% drop and the iShares S&P Global Nuclear Energy Index (NASDAQ: NUCL) with its 8% drop.  If that is not enough pain, the centrifuge player USEC Inc. (NYSE: USU) was also down 11% and the Canadian uranium miner Cameco Corp. (NYSE: CCJ) was down 12.7% today.  Shaw Group Inc. (NYSE: SHAW) is a manufacturer of nuclear and other power plants, and its shares were down 9.2%.  All five of these ‘honorable mentions’ were at one point down much more than where they closed.

If you go through the Nuclear Regulatory Commission press briefing that was detailed word by word and blow-by-blow on the White House website, Press Secretary Jay Carney, Chairman Greg Jaczko, and Deputy Secretary of Energy Dan Poneman, it is very obvious that nuclear power in America is not going get scrapped here in America.  Will there be more scrutiny?  Yes.  Will new unapproved projects get rubber-stamped?  Unlikely.  Will newly approved and pending projects get to proceed?  Most likely, even if on a slower scale.  However, the Obama Administration is not dumping nuclear power even if it says that it is going to offer more scrutiny and reviews.

Deputy Secretary Poneman was quoted as saying, “Nuclear power has been a critical component to the U.S. energy portfolio. We have 104 operating reactors — that’s 20 percent of the electricity of this country; 70 percent of the carbon-free electricity in this country comes from nuclear power. So we do see nuclear power as continuing to play an important role in building a low-carbon future. But be assured that we will take the safety aspect of that as our paramount concern.”  Continuity, with the token safety comment.

Here is a current location map of the existing plants currently in service followed by the new projected nuclear power reactors: 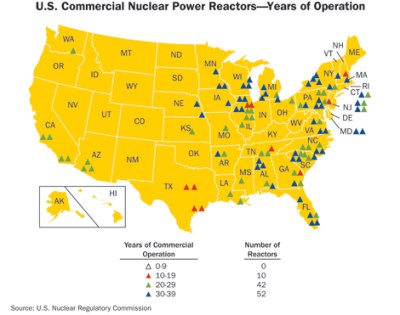 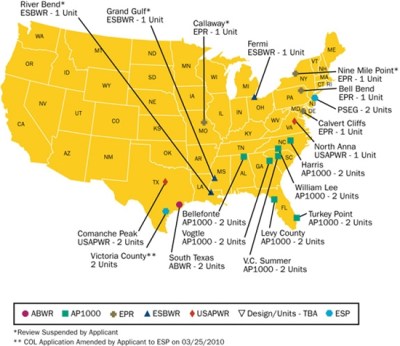 Nuclear Power is not without controversy and is not without at least some safety issues.  There is just one problem in killing nuclear power. The world wants cleaner power with less and less fossil fuel.  Coal is dirty and clean coal is just less-dirty.  Natural gas is plentiful and works.  Wind and solar cannot currently come anywhere close to powering the entire grid today nor in a decade.  Hydroelectric power is already being used where possible.  Unless we are willing to turn off our computers and TVs and go back to reading by candle light, there is just no other alternative but to not proceed with nuclear power.

There is a risk to the assumption here.  Media reports of people running with who are getting severely ill from radiation levels will slow this down further.  A total meltdown might not ultimately kill the growth of nuclear power, but politicians “taking the line of prudence” by demanding a halt and rethinking of the entire nuclear power arsenal will ultimately delay nuclear projects to the point that nuclear power will feel as though it died.

Today was a marked delay and one that will not go away easily.  Before thinking that sell-off in these stocks is just entirely unjustified, consider that it is now likely that every single nuclear power provider and company involved in and around uranium is certainly going to face delays or cancellations in orders.  Expect an earnings warning from every one of these companies.  European nations are reconsidering nuclear power entirely now, although they still have the dilemma of deciding what other choices there really are.

Our take is that nuclear power just took a hard right hook on the chin and just lost this fight.  Still, the fighter was knocked out only temporarily and will likely get to fight in many more matches ahead.  Going back only to fossil fuel carries too large of a price.

The caveat is a total meltdown scenario… If that happens, all bets are off.