Ten States Where The Internet Is Too Slow 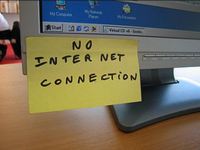 In much of the country, access to affordable, high-speed internet is taken for granted. However, in vast sections of the United States broadband internet is either unavailable or too expensive for low-income families. The Federal Communications Commission, the Small Business Committee, and the U.S. Department of Agriculture have all urged service providers to expand to rural areas. But the companies contend that it would cost far more to run lines or install wireless towers in these remote areas than the profits that could be made from the few low-income families that live there.

Most of the areas with slow or nonexistent internet access are indeed in remote regions with tiny populations. On the West Coast and in the Northeast, where the average population can by anywhere from 200 to 1,200 people per square mile, providing service makes sense for companies. In areas like Wyoming, Montana and Alaska, the average can be fewer than 10 people per square mile. In addition to a lack of concentrated paying customers and rocky and mountainous terrain, which often goes hand-in-hand with sparse population, complicates the cost of developing broadband networks in these locations.

The FCC maintains that access to high-speed internet is not merely a convenience, but essential to provide a fair chance at a job and an education, as well as to run a successful business. In a report released last year, the FCC maintained, “approximately 26 million Americans, mostly in rural communities located in every region of the country, are denied access to the jobs and economic opportunity made possible by broadband.” In mid-August, the USDA announced the provision of $103 million in federal funds in 16 states to help develop broadband networks in rural communities. This is the latest in a series of efforts by the government to provide installation and discounts for families, schools and small businesses.

In order to identify the 10 states with the slowest internet connections, 24/7 Wall St. looked at research firm Pando Networks’ report on broadband access in the U.S. The report, which identifies the average download speed in each state, clearly shows the disparity in service between states in the Midwest, West and Southwest, and the highly connected states in the Northeast, South and West Coast. The report also identified the average success rate of downloads in each state. Data from the Census Bureau and Bureau of Labor Statistics was also used to identify problems the states faced in terms of low income, poverty and unemployment. Finally, the FCC’s National Broadband Map was used to identify the geographic areas with little or no access to broadband service.

These are 10 states where the internet is too slow.