The Colleges That Guarantee the Highest Salaries 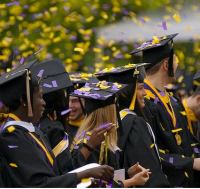 It seems that the top universities deliver on their promises and that a top education very nearly guarantees a successful career and high salary. Princeton graduates, for example, earn $130,000 (median salary at mid-career), while Coker College alumni make about one third of that, or $43,400, according to PayScale’s 2011 – 2012 College Salary Report. The report looked at salaries earned by alumni of 1,003 of America’s most prominent colleges. 24/7 Wall St. reviewed PayScale’s report to identify the ten schools that offer the diplomas with the highest-earning potential, paying special attention to where they excel.

Read The Colleges That Guarantee The Highest Salaries

Two categories of schools dominate the list of colleges whose graduates end up with highest-paying jobs. The first category is the Ivy Leagues. The top ten colleges with the highest mid-career salaries for their alumni includes Dartmouth, Harvard and Princeton. These schools offer top-tier education and have continually produced world leaders in business, politics and more. Perhaps more important, the Ivies have closely-knit networks of successful alumni. Not only does a Harvard grad have the benefit of a Harvard education, but the benefit of Harvard connections with countless future employers.

These are the ten colleges that guarantee the highest salaries.