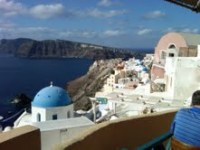 Up until today, U.S. investors could only invest in (or short sell) the ADRs of National Bank of Greece S.A. (NYSE: NBG), Coca-Cola Hellenic Bottling Company S.A. (NYSE: CCH), or a handful of shipping ADRs for a theme around Greece.  No more… Global X Funds is launching the Global X FTSE Greek ETF (NYSE: GREK).

The company noted, “Whether bullish or bearish, this new ETF allows investors to take a viewpoint on the recent news coming out of Greece.”  Guess which way the bulk of the bets will be.  The release has also noted, “While there is no guarantee that the Greek economy will recover to previous levels, current valuations may create an attractive entry point for the long term investor.”

We have a question and it is a legitimate one.  CAN AN ETF LEGALLY HAVE A NEGATIVE FLOAT?  Imagine how many investors will still want to short sell this ETF.

The introduction has noted that the market cap of the Athens Stock Exchange reached a peak of $220 billion in 2007 but has now fallen almost 90% to a market capitalization rate of about $28 billion as of the end of November.

The index is composed of the 20 top stocks listed on the Athens Stock Exchange. Its top three holdings as of December 1, 2011 were National Bank of Greece, Coca-Cola HBC, and Greek Organisation of Football Prognostics SA.

At best, this ETF’s listed stock ticker could have been “CRUD.”  It could have even been given another four-letter ticker starting with “SH” but that would have been too obvious.  And to imagine, we were preparing to offer $100.00 as the starting bid for the island of Santorini.

Imagine this for irony.  The worst performers generally turn out to be the best performers during a recovery.  If Europe somehow manages to get its act together and if the Greek haircuts and austerity measures somehow actually all go through, it is possible that this Greek ETF could be among the best performers outside of the leveraged ETF products.