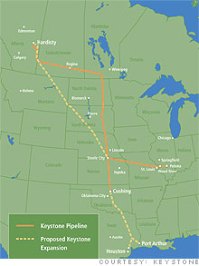 Drivers won’t be the only ones affected. Canadian producers like Exxon Mobil Corp. (NYSE: XOM), Suncor Energy Inc. (NYSE: SU), Cenovus Energy Inc. (NYSE: CVE), and others will gain a substantial price hike on Canadian crude. We noted this when TransCanada announced a couple of days ago that it would go ahead with a plan to build a 423-mile section of the pipeline from Cushing, Oklahoma, to Port Arthur, Texas.

Refiners like Marathon Petroleum Corp. (NYSE: MPC) and HollyFrontier Corp. (NYSE: HFC), which currently benefit from their ability to get the cheaper oil from Canada, will take a substantial hit on prices. We wrote about this yesterday.

The reason for the higher prices is pretty basic: the Canadian oil is curretnly essentially stranded and was priced at an average discount to Brent crude of about $23.50/barrel in 2011. Moving Canadian oil to the Gulf Coast where prices are higher will not lower the price of Brent crude unless the new oil more than replaces the existing supply. The Gulf Coast imports around 5 million barrels/day and the Keystone XL pipeline and a couple of other pipelines proposed to move oil south from Cushing to the coast will transport less than 1.5 million barrels/day if and when all the current plans are realized.

The effect will be to raise the price of Canadian crude everywhere, including the Midwest and the Rocky Mountain regions, where Marathon and HollyFrontier do their refining. Their feedstock costs will rise and the price for their refined products will also rise.

The Canadian plan [for the Keystone XL pipeline] was to use their market power to raise prices in the United States and get more money from consumers.

Verleger estimates that gasoline prices will rise $0.10-$0.20 a gallon in the Midwest and Rocky Mountain regions.

The Keystone XL pipeline is far from a free lunch. It will not make the US any more energy independent and it certainly will not lower gasoline prices. If US drivers continue to drive less, then Canadian oil will reduce the amount of oil imported to the US and help with the US trade balance. That’s a good thing, but is it enough?