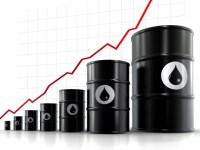 Oil demand is being revised lower in a new forecast by the Energy Information Administration.  The reality is that the demand erosion is modest at a mere 70,000 barrels per day in the United States.  That in turn is taking the average price per barrel expected on the refiner acquisition level down to $112.00 per barrel.  The reality is that this is $10 above a year-ago as an average price, and U.S. oil demand is seen at a 15-year low with gasoline demand at an 11-year low.

The EIA now expects the price of West Texas Intermediate crude oil to average about $106 per barrel in 2012, which is the same as last month’s projection but it is $11 per barrel higher than the average price last year. Transportation constraints from the U.S. midcontinent region remain a reason for the discounting. The EIA further went on to say that it expects WTI prices to remain relatively flat in 2013 around $106 per barrel with an average refiner acquisition cost of crude oil averages $110 per barrel in the United States.  With refining at risk for price spread gaps, Valero Energy Corporation (NYSE: VLO) is down 4.3% at $23.64 against a 52-week trading range of $16.40 to $29.55.