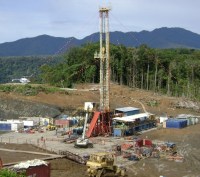 Canada-based exploration & production company InterOil Corp. (NYSE: IOC) said yesterday that it believes the government of Papua New Guinea (PNG) is preparing to cancel the agreement under which the company is building a massive liquefied natural gas (LNG) project. The project is one of two currently under construction on the island nation. The other project is being led by Exxon Mobil Corp. (NYSE: XOM

) and has run into problems on its own.

InterOil’s Gulf project has been scheduled for completion in 2014 or 2015, but the company has had trouble finding another partner to help with the estimated $6 billion construction costs. A plan to use a floating LNG plant was scrapped in March and InterOil’s discussions with the government have become increasingly strained. An energy industry publication, Upstream Online, cites the country’s oil minister:

Minister for Petroleum and Energy William Duma had said that “far from being a world class project of international scale and quality”, InterOil’s new plan was a “small scale, fragmented LNG project using a combination of different production methods.”

The company denies the charge and says it continues to plan a “world class” facility.

A January landslide at a quarry once operated by a subsidiary of Exxon killed at least 25 people, forcing the closure of Exxon’s own $15.7 billion PNG project for two weeks in March following a protest by local landowners. The project is scheduled to begin operation in 2014.

InterOil’s may be able to solve its problems with the PNG government, but delays in contracted deliveries are another problem the company could face. The company signed a long-term deal with trading firm Gunvor late last year for 1 million metric tons of LNG per year beginning in 2015. The deal is non-binding, but InterOil’s ability to fund construction and have a chance of completing the project depend on its ability to convince Gunvor that InterOil will deliver. Any threat to that agreement, or to others that the company has made, jeopardizes InterOil’s very existence.