Merrill Lynch Worries About Earnings Ahead: FX and Dollar Woes to Continue!

Merrill’s FX Strategy team now expects the euro to hit dollar parity by the end of the year. Despite the recent rise in oil, the firm’s Commodity Strategy team continues to see further downside risk to oil prices.

There is one big warning here if the quant and strategy teams are right. This would indicate the first year of negative EPS growth since 2009. The team said:

For 2015 and 2016, our revised earnings per share forecasts imply 2% and 7% downside to current bottom-up consensus expectations, respectively. The main drivers of the EPS contraction are the 50% drop in crude oil prices and the 20% strengthening of the dollar since last June.

What is amazing is just how much drag the dollar and lower oil prices are causing. The Merrill Lynch teams showed their expectations, if you excluded these two factors. Earnings growth would be closer to 10% in 2015, versus 8% in 2014.

While those factors present meaningful headwinds to near-term growth, we do not expect the impact on growth to get much worse from these levels and should start to fade by the second half of the year as we start to anniversary the big moves in FX and commodities. Along with the outlook for accelerating global growth in 2016, this should set the stage for positive year-on-year EPS growth to resume by the fourth quarter with a return to more normal growth of 7% in 2016. The transient nature of the “earnings recession” may explain why the market can end the year higher.

The last area covered was that a stronger dollar generally hurts EPS, but that may be offset by higher price-to-earnings (P/E) multiple expansion. Tuesday’s report also signaled that every 10% rise in the dollar results in a $3 to $4 headwind to S&P 500 EPS. Markets have historically looked through this impact — hence the multiple expansion. In the past two periods of dollar strength (1978 to 1985 and 1995 to 2002), P/E multiples expanded by 39% and 52% (or three points and eight points). Similarly, in this cycle the S&P 500 P/E multiples have continued to rise amid the years of significant dollar strength.

While the Merrill Lynch report might include some shocks and scares with lower oil expectations and a stronger dollar continuing to hurt S&P 500 EPS, markets do at least try to price in moves and trends long before they end. Another outside observation about the Merrill Lynch call is that the dollar is already well off its highs, and oil is well off its lows. The U.S. dollar/euro was back at $1.10 as recently as Monday, versus a recent multiyear cycle low of under $1.05, and West Texas crude was above $53 on last look, after having been under $45 as recently as mid-March.

We have included a table of the EPS outlook from Merrill Lynch, versus consensus readings. This also includes the implications for P/E ratios, dividends and which sectors should see the most and least growth ahead. 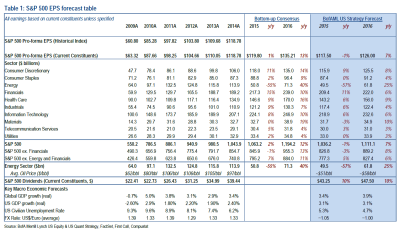