Meet the Full 2016 Dogs of the Dow for Massive Dividends

International Business Machines Corp. (NYSE: IBM) is a Dogs of the Dow member due to poor performance. While IBM has raised its dividend and keeps buying back stock, its shares were down by 11.4% in 2015. The 3.78% dividend yield may not be enough to stave off declining core business concerns and lower backlogs. IBM just cannot grow its new efforts fast enough to make a huge dent. IBM is even considered a classic value trap because no one is willing to pay over 10 times earnings here.

Exxon Mobil Corp. (NYSE: XOM) also has suffered from lower oil and gas prices, just like Chevron, and its 3.75% yield made that -12.8% performance less negative than it would have been. Exxon Mobil is a large buyer of its stock and is protecting its dividend, with an emphasis on the dividend protection. Its dividend seems safer than Chevron’s, which may be why Chevron outyields Exxon.

Pfizer Inc. (NYSE: PFE) ended 2015 with a 3.72% yield. The drug giant is now involved in a merger with Allergan, which may or may not end up being approved and which may or may not be allowed to be a tax inversion. Pfizer closed up 7% in total return, but over half of that gain was due to the dividend. Pfizer also just raised its dividend at year’s end.

Merck & Co. Inc. (NYSE: MRK) has been restructuring like Pfizer, but its merger risks might be less present today than its DJIA rival. That may explain why its dividend yield is 3.48%, and Merck lost almost 3.9% in 2015. Could Merck have less event risk than Pfizer? Both companies may have pricing and patent risks as ongoing issues.

Procter & Gamble Co. (NYSE: PG) lost almost 10% in 2015, and the restructuring hasn’t seemed to help. The company still wants to get rid of more product groups to focus on core and growth markets. Now it yields 3.34%, but its valuation at over 18 times earnings just doesn’t feel cheap yet. Maybe Procter & Gamble can have a better 2016, as analysts are looking for a 5% price gain, before taking the yield into consideration.

Wal-Mart Stores Inc. (NYSE: WMT) was the worst performing stock on the Dow in 2015 (-26.6%). Its dividend yield of 3.2% is so high solely because of the drop in the stock. Wal-Mart has higher wages to blame, but store sales just aren’t exactly taking off here and growth prospects may be limited. Being the world’s largest retailer by far means that maybe that Wal-Mart just needs to work on its earnings and dividends — while it buys back billions in stock too.

Cisco Systems Inc. (NASDAQ: CSCO) has raised its dividend, making it the highest technology dividend. It also edged out the likes of General Electric for the tenth spot on the list. That came down to the wire for 2016. Cisco’s growth is being driven by growth markets, but the dollar and slower growth outside of the United States have both kept results mixed here. At least investors know Cisco will keep buying back stock, and it has room to raise that dividend ahead, with a valuation at less than 12 times forward earnings.

A view below has been gather from FINVIZ: 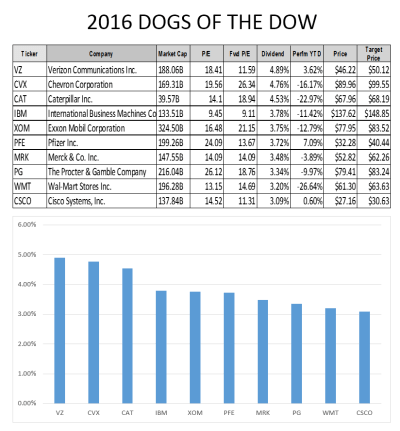